A watersport for outdoor enthusiasts 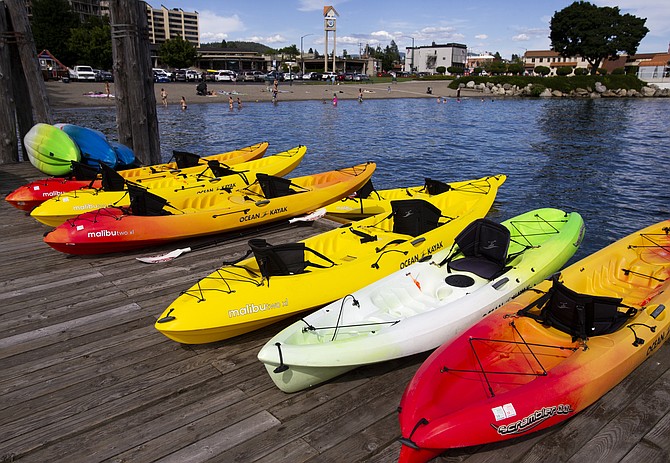 The Coeur d’Alene Watersports business has been open for 17 years and has mostly stayed the same. They offer canoes, paddle boats and paddle boards.

The word as well as the invention itself comes from native Inuit peoples in Alaska: Kayak literally translated means “hunter’s boat.” The small, narrow craft — originally handcrafted from driftwood, whalebone and animal skin — is today most often used by one or two people at a time for racing, fishing or just a lazy float. Fishing kayaks are the most popular market segment.

Kayak Coeur d’Alene owner Chip Dalvini moved to the Lake City in 1999 with his wife and co-owner, Ginger. He’s always been interested in watersports and, after moving to Coeur d’Alene, he bought a kayak. He liked it well enough that he decided he wanted to open a kayak business.

He launched the enterprise 17 years ago as an outfitter that led tours on Lake Coeur d’Alene. Today, the company offers kayak and stand-up paddle board rentals and lessons, as well as kayaks and paddle boards for sale. Dalvini said kayaks can start as low as $150 though he noted that boaters get what they pay for: A good kayak tends to cost a little more.

North America is expected to record the fastest kayak sales expansion through 2026, followed by the Asia-Pacific region, according to recent industry forecasts. One trend fueling the growth: Kayaks provide an outdoor experience in an environmentally friendly way.

Dalvini said the first few things he teaches beginners include an efficient forward paddle stroke, how to turn and how to move backward. The most common problem he sees in beginners is that they often paddle using their arms. Experienced kayakers know to use their core muscles. Beginners also often hold the paddle too tight.

Dalvini and Coeur d’Alene Watersports owner Reuben Rodroguez said July was the busiest time for kayak rentals. The weather and water are warm, and people want to be outside Rodriguez said

Coeur d’Alene Watersports, located at Independence Point on Lake Coeur d’Alene, serves customers from all over the world, Rodriguez said. The business has been open for 17 years and has mostly stayed the same except they ditched a canoe and added paddle boards.

“I would say it is one of the most fun jobs you could ever have,” Rodriguez said. “You are out in the water, you are having fun with customers and you’re meeting people from all over.”