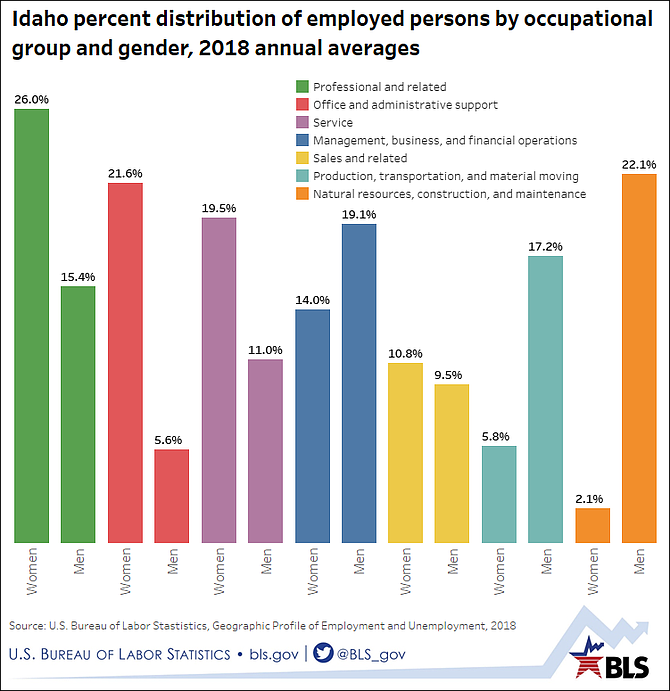 For every dollar men earn in Idaho, women, on average, earn 79 cents, according to a new report by the U.S. Department of Labor’s Bureau of Labor Statistics.

Comparisons in the BLS report were not controlled for differences in important determinants of earnings such as age, occupation, and educational attainment.

According to Deborah Vagins, Senior Vice President of Public Policy and Research for the American Association of University Women, in some occupations, women collectively receive billions less than they would with equal pay. Vagins said women working as physicians and surgeons collectively earn $19 billion less annually than if they were paid the same as men in that occupation.

AAUW, a national nonprofit organization, works to advance gender equity for women and girls through research, education, and advocacy.

“But this isn't just a women's issue. It's a family issue. The majority of single-parent households in Idaho are led by women. Women can't support their families working minimum wage jobs.”

According to the AAUW website, someone working a full-time, minimum-wage job in Idaho takes home just $12,300 per year.

AAUW is partnering with Idahoans for a Fair Wage, petitioning the state legislature to raise the minimum wage to $12/hour. They need a little over 55,000 validated signatures, or 6 percent of the people who voted in last major election from at least 16 precincts, by April 30th to get the initiative on the ballot.

“We have about 21,000 signatures; probably around 15,000 are validated,” said Don Kemper, coalition director for Idahoans for a Fair Wage. “County clerks take some time to validate the signatures, to ensure they are legible and that they are at the same mailing address as the person’s voter registration.”

“The initiative is just like how we closed the gap on Medicaid expansion,” said Sylvia Chariton, Co-President of the AAUW of Idaho. “We’re trying to get public approval through the voting process to raise the minimum wage. Idaho legislatures have been reluctant to change the minimum wage.”

The last time the Idaho Legislature raised the minimum wage was 2009.

The initiative also aims to raise the minimum wage for tipped employees from $3.35 to $8.10 an hour.

“The increase is more livable for everyone, but especially people who live in high tourist areas like Coeur d’Alene, McCall, and Sun Valley and people who rent in areas like Boise and have high rent,” Chariton said.

The increases would occur over a four-year period in four incremental steps.

“In Idaho we just have to take it little steps at a time,” Custer said. “We will actively advocate for increasing the minimum wage. Also, we will actively support increasing funding for education. We feel that our branch members can do that at the state level to have a positive impact on closing the pay gap in Idaho.”

Coeur d’Alene entrepreneur Melinda Cadwallader took an online salary negotiation course from the AAUW. Cadwallader is in the process of opening The Hive, a coworking space in downtown Coeur d’Alene dedicated to providing women with the resources they need to invest in their personal and professional development.

“We are publicizing a free online salary negotiation tool designed for women that are already in the workplace,” Custer said. “It gives them tools and techniques for how to be more effective in negotiating for higher salaries.”

“We will not wait for policies and employer culture alone to determine when we reach parity,” AAUW’s website reads. “We are working to empower women nation-wide with skills to effectively negotiate their salary and benefits and become agents of change in their communities.”

“I want to help women have these conversations with their employers, to demand transparency,” Cadwallader said. “I want to host that class at The Hive to empower women with the resources they need to earn fair wages. That is the essence of a beehive. You come in and you learn and then you scatter. Women can practice the communication you need to have in these negotiations and then be able to ask your employer for fair pay.”

Part of the discrepancy in male and female wages stems from unregulated treatment of pregnant employees throughout the nation. The American Civil Liberties Union is lobbying for Congress to pass the Pregnant Workers Fairness Act.

“Every year pregnant workers continue to face significant obstacles at their workplace as a result of weak laws or misunderstanding from employers about their responsibility,” said Leo Morales, Executive Director of the ACLU of Idaho. “The legislation would provide a mechanism for reasonable accommodations and basic workplace protections for pregnant workers.

According to the ACLU’s website, “this bill would require that employers make reasonable accommodations for pregnancy that don’t place an undue burden on the business. It would also prohibit employers from forcing pregnant workers to take unpaid leave, denying job opportunities because of pregnancy, and retaliating against anyone who opposes such discriminatory practices.”

The Pregnant Workers Fairness Act is modeled after the American with Disabilities Act.

“Discrimination sometimes comes in the form of granting some employees job modifications, yet denying those same modifications to pregnant workers,” Morales said. “The discrimination often tends to impact women in low wage jobs, with physical demanding duties and in industries dominated by men. The impact to women is severe and can have both short-term and long-term consequences. Entire families are impacted whenever women are coerced into taking unpaid leave, or fired.”

Women face an income gap in retirement, according to the AAUW website. Because women have earned less and therefore paid less into the Social Security system, they receive less in Social Security benefits. They also lag behind men in pension benefits and all other sources of retirement income.

Even if women start out earning comparable wages for equal work, they often miss or are overlooked for the opportunity to advance their careers in the same manner as men.

Native American women on average earn 58% of white male’s earnings, widening an already large pay gap, according to the AAUW. Latinas statistically earn even less, making 54% of what a white man earns. This gender and ethnic pay gap pervades the workplace.

The gender pay gap has narrowed over time, in large part because of local and federal legislation. At the current rate, however, the gender pay gap will not close until 2106, according to the AAUW.

The Equal Pay Act of 1963 made it illegal for employers to pay men more than women performing the same job.

Even with the Equal Pay Act and the Lilly Ledbetter Fair Pay Act, legislation regarding the gender pay gap still relies heavily on state laws and varies dramatically across the country. California, New York and Florida have achieved smaller gaps through progressive legislation. Mississippi and Alabama have no equal pay laws at all. Idaho has moderate laws protecting women from the gender pay gap in the workplace.

“They are more the low hanging fruit types of [laws],” Custer said. “As an example of strengthening equal pay protections, AAUW would like to see Idaho enact legislation that prohibits using salary history in hiring.”

On Jan. 30, 2019, Rep. Rosa DeLauro (D-CT) introduced H.R 7 Paycheck Fairness Act into the United States House of Representatives, an act “To amend the Fair Labor Standards Act of 1938 to provide more effective remedies to victims of discrimination in the payment of wages on the basis of sex,” according to Congress’s website. The bill passed to the Senate on March 27, where it continues to sit.

“Right now the legislation is with the Senate Majority Leader’s office who sets the voting schedule, so it’s up to Leader [Mitch] McConnell if and when the bill is voted on,” said Marty Cozza, Press Secretary for Idaho Senator Jim Risch, said. “Senator [Risch] will review the legislation once it’s brought to the floor for a vote.”

While equity in the workplace is on the rise, equity in the home still lags behind other developed countries. Women still do the majority of household work in America while working full time jobs, according to data from the Pew Research Center.

Since the 1960s, women have cut the hours they spend doing housework in half, from 32 hours on average per week to 18 hours a week. Men have doubled their contribution to the household, increasing from 4.5 hours to 10 hours of household chores per week. But women are still on average contributing twice as much time to housekeeping as men.

The Bill and Melinda Gates Foundation has tackled this issue on a global scale. According to their website, women still face barriers around the world in health care, education, labor and income.

“As a result of these barriers, women earn less, own fewer assets, and are underrepresented in economic and political decision-making processes,” the website says. “Because they are unequal in society, they experience fewer benefits of economic growth and more of the challenges of life in poverty.”

According to a 2015 study by the McKinsey Global Institute, the global economy would grow by an estimated $28 trillion by the year 2025 if women participated in the economy to the same degree as men. 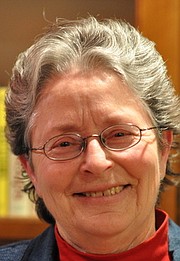 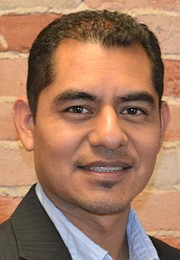