Name of this game is Coeur d'Alene-opoly 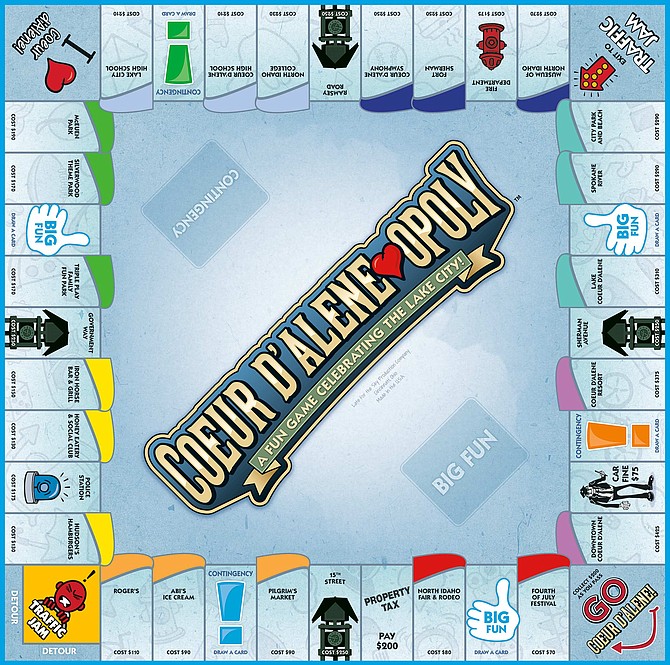 And the Lake City loves its annual celebrations, including the North Idaho State Fair and Rodeo and Fourth of July festivities.

These local landmarks, occasions for merrymaking and more are included in the new Coeur d'Alene-opoly board game, created by Cincinnati-based Late for the Sky Productions and exclusively for sale for $19.98 at local Walmart stores.

"There's a lot of civic pride anywhere across the United States," Late for the Sky marketing manager Michael Schulte said. "To have that about your own town, there’s great appeal for that."

"We always make sure that the locals love their town before we take on a project," Late for the Sky co-owner Bill Schulte said in a news release. "We try to make the content as authentic as possible."

Late for the Sky started in 1985 by making licensed, collegiate board games with a property trading theme. The company has no affiliation with Hasbro, the makers of Monopoly, and does not use any of its protected trademarks.

North Idaho-opoly was on the shelves through the holiday season, showcasing Farragut State Park, the Route of the Hiawatha, the Festival at Sandpoint and more.

The Coeur d'Alene-opoly games have been going fast, too. Real estate agents have bought them to give as gifts when clients new to the area purchase homes, Joey said.

"We've got more coming," he said. "I feel like this is going to be a big game for North Idaho, especially the Coeur d'Alene area." 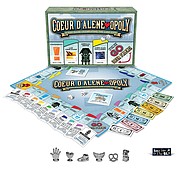 A game celebrating the Lake City is on Walmart shelves now. Coeur d'Alene-opoly includes favorite places such as McEuen Park, Hudson's Hamburgers and the Museum of North Idaho.