How Pat McGaughey found himself — and success followed 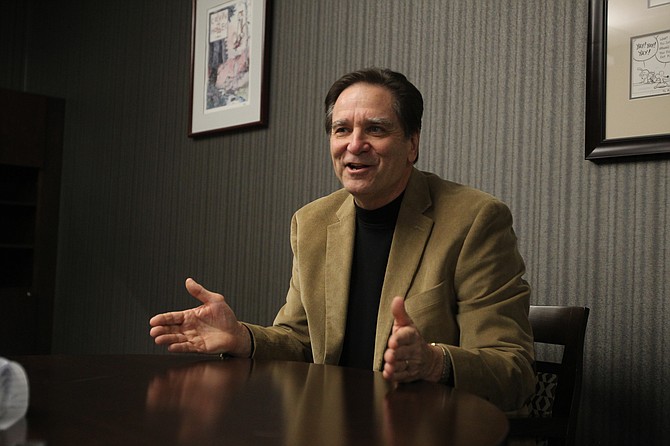 Behind those stories are numbers. Lots and lots of them.

Five: The average number of sessions per year he’s taught at the U.S. Chamber of Commerce for more than two decades, which is how long he’s been serving as a professional facilitator, Chamber mentor, keynote speaker, seminar leader and volunteer leadership trainer. (Yep, that’s five hats.)

Five was also Pat’s age when he was standing up in the front seat of his mother’s Cadillac in Beloit, Wis., when an Elvis Presley song came on the radio. “I said, ‘Elvis Presley’s at the radio station. Let’s go.’ Mom said, ‘No, he’s not there,’ but she couldn’t convince me so we went down to see. I got a single tour of the radio station and at age 5 I knew that was part of my future.”

Eight: An extremely lucky number that we’ll get to shortly.

Fourteen: Pat’s age when his golf handicap was 4. He was shooting in the 70s from standard tees when he was 14 years old.

Forty-two: When Pat started out on his own — he already was in his mid-40s — he determined that to make a go of it, he needed to conduct 42 “pieces of business” a year. And that’s what he did the first three years. After his wife, Gail, managed the company? The number skyrocketed to 65 engagements a year.

Forty-two is also an interesting number in a roundabout McGaughey (pronounced ma-GOY) way. One of his greatest, lasting creations occurred in 1990, when somebody dropped a magazine on his desk that declared Idaho wasn’t the No. 1 tourism state in the U.S. — an honor that belonged to Florida. So looking at that map of Idaho upside down Pat said, “Oh my God, it looks like Florida!”

Since then, Pat has had countless T-shirts made and distributed that say, “Visit Idaho. Upside down it looks like Florida.”

Oh, yeah — 42. That was Idaho’s ranking in tourism the year McGaughey made modern marketing magic.

One thousand nine hundred ninety: That was the year Pat had his first meeting with Duane Hagadone, one Pat will never forget because of the profound impact and influence Hagadone has had on him.

“It’s 1990 and I’m going to my very first meeting with Duane Hagadone,” McGaughey recalled. “I run into Billy (Reagan) and he asks where I’m going. I say to go meet Duane. He goes, ‘Whoa! Go shine your shoes. If you don’t shine your shoes he’ll give you a seven-minute courtesy interview and then dismiss you.’”

So McGaughey quickly visited Kenny, who for years shined shoes and made friends at The Coeur d’Alene Resort.

And how did his visit with Mr. Hagadone go? Let’s say it made a lasting impression.

“Here’s the lesson,” said McGaughey, who has a million of them. “I’m going up the spiral staircase [at the corporate office] to meet with Duane and I had an epiphany. I just went out of my way to shine my shoes for him. Why not for you? Or for him? Or for her? Or anybody else?

“From that moment on, very seldom do you see me when my shoes aren’t shined.”

100,000+: That’s at minimum the number of individuals McGaughey has addressed/keynoted/workshopped/trained as a consultant and facilitator.

For those who aren’t exactly sure what a consultant-slash-facilitator is and/or does, McGaughey had a quick answer: “I’m like a flashlight at high noon,” he said. “I’m here to illuminate what you can already see.”

His slightly longer explanation is a little more illuminating:

“I like to think of myself as someone who brings people together for a common cause, common purpose, bringing minds together and mediating arguments. The secret to facilitating different ideas in the room is…make the best ideas rise to the top.”

Numbers aside, if you’re the rare Coeur d’Alene resident who has not met or heard Pat McGaughey speak, you should know this. His voice is one of his greatest assets. That voice has helped him deliver his messages and tell his stories in the most powerful ways, no doubt leading to his trove of repeat business over the past 20-plus years.

While he doesn’t hold a college degree — “My BS comes without the little periods,” he joked — he’s a lifelong learner and prolific reader who “pays attention.”

“I’m self-educated,” he said with a hint of pride. “I believe my Kindle is heavier than most people’s.”

But the story of his arrival at the doorway of career fulfillment doesn’t lurk in any Kindle.

The year was 1992. McGaughey’s friend, Brad Dugdale of D.A. Davidson, put on a seminar and brought in Mark Victor Hansen — the motivational speaker who’s even better known as the creator of the Chicken Soup for the Soul series.

“Mark Victor Hansen had all these middle-aged guys in there and he said, ‘What do you want to be when you grow up?’ I said to myself, ‘I want to be you.’”

Hansen instructed the group to write down a mission statement, and Pat complied.

“Why? For my positive influence on other people. A standing ovation for me is when somebody takes a note in a class or session. So I write it out:

“I will be internationally recognized and rewarded for my positive influence on other people.”

“I got a mission statement, and that puppy went right on the refrigerator door so I could see it every day — until it became invisible.”

Business sessions like those inspire you, McGaughey can attest, “and you’re under the ether. But then the real world takes over again.”

Fast forward to 1999. McGaughey has been working for Dr. Jack Riggs and North Idaho Immediate Care Centers for a year and a half, basically as the business’s facilitator. One day Gail says to her husband, “If you could do anything in the world by yourself, what would you do?”

“She pulled out a large amount of cash and said, ‘Get in the car and go away, and don’t come back until you have figured it out.’ She wasn’t telling me to leave her. She was telling me to leave medicine. Because you see, in radio and in the chamber of commerce, when you make a mistake, nobody dies.”

Those final two words come out like a dying man’s last gasp.

“Gail said, ‘You’re the most well-paid, unhappy man I’ve ever met, and I want the old guy back.”

So despite feeling guilty “spending family money on my ‘go find yourself trip,’ I left,” McGaughey said.

Keeping in mind that number from earlier in this story, the number eight, here’s how Pat McGaughey found himself — in his own rich voice.

I stayed at the cheapest motels just so I wouldn’t spend all this money and I stopped at a coastal casino. They had a $4.99 prime rib buffet at this brand new casino down on the Oregon coast. To get there I had to go through the casino part. I put $5 down on No. 8, my birthday. It hit, for $175. They gave me $175 and left the $5 on No. 8. It hit again. I had $350 in my pocket. I took that, went and had dinner, stayed in the cheap room and then started not feeling so guilty.

The one thing I wanted to do on this trip was play Spyglass Hill again. It’s the finest track I’ve ever played. I called and asked how much is it? They said $450 plus cart — another $150. I’m looking at $600. I say to the guy, I’m looking to rent the cart, not buy it. I didn’t play. I could afford it, I just couldn’t do it. Scot-Irish; McGaughey. Cheap; stubborn. Cheap; stubborn.

I ended up in Lake Tahoe, where Gail and I spent our first anniversary together. I’m looking for these rooms, and on the California side of Lake Tahoe, they’re $29 — it’s like a square tent. It’s April so it’s offseason. I go clear to the end, Nevada side, and there’s $3.99 prime rib at Harrah’s. I’m going there for dinner.

So I have to walk through the casino and there’s a roulette wheel. You cannot make this up. Five bucks on No. 8 because it worked before. It hits. They leave the $5 on the deal and I say, ‘That worked pretty well,’ so I put another $5 on it. And it hit again. It hit again. One bet paid me $175; the other is 35 to one.

So now — I haven’t even spent the first $350 I’d won on that other deal — so now I have even more. So I go back (to the concierge) and I say, “I want room service for breakfast, lunch and dinner. I can’t find myself — I’m on this ‘go find yourself trip’ and I want to live like Howard Hughes. I’m going to read a book and just veg out.”

The only time I left the room was to go to this beautiful sauna downstairs to work out. At noon the first day, knock on the door — room service! I was reading a book called Cold Mountain [by Charles Frazier] — Gail had given it to me so I’d have a book to read.

I threw it on the bed, opened the door. Here’s this tall but young woman. She pushed my food in and sees the book on the bed and says, “Oh, I see you’re reading Cold Mountain.” I immediately know I’m speaking to an educated person. She says, “Can I ask you a question?” Keep in mind this is 1999. She goes, “Is it taking you a long time to read?” I go, “My God, yes!” I said, “This book — I can’t turn a page. I can read a Tom Clancy in two days. I’ve taken Evelyn Wood. I can read fast. But I can’t turn a page on this. What’s the deal?”

She says, “I can tell you why. This book is so beautifully written you can actually feel the wind coming through the hospital window. You can hear the leaves crunch. It is so well-written that you are in every moment and you don’t want to leave.”

This is a lady bringing food into my room. I said, “You must read a lot.” She said, “Oh, I make it my mission to read a book a month and it’s usually a book a week.”

I walked over to the table next to the bed and I had all these green and black chips from roulette and I got a green one — $25 — and I said, “This is for you. This is your tip.” She said, “Oh sir, I can’t take that.” I said, “Young lady, look. You have just changed my life.”

What word did she use? Mission. “I make it my mission.” I called Gail and I said, “Gail, go to my Mark Victor Hansen file.” Here I am trying to find myself — I was seeking and I couldn’t find — and this girl comes in and sees this book that Gail had given to me.

Gail read it out loud: “I will be internationally recognized and rewarded for my positive influence on other people.” I said, “OK thank you very much, I gotta go!”

Those rewards aren’t inclined to end anytime soon. McGaughey said he has no plans of quitting, that he still thoroughly enjoys having a positive influence on others and making a very good living.

But in the realm of rewards, he looks no further than the woman standing at his side now, like she has for so many years; the woman who lovingly gave him the kick he needed to find himself.

In that rich radio voice of his, Pat McGaughey said reverently, “She’s my gift.”