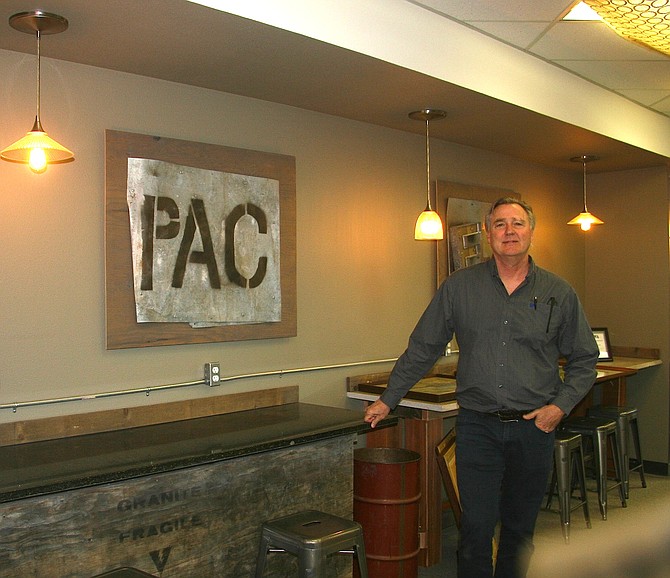 Wally Jacobson has been executive director of the Hayden-based Panhandle Area Council economic development district and nonprofit for about four years. 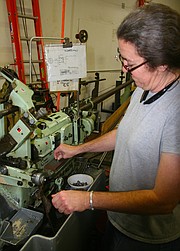 Sunny Chase removes sharp edges from the body of a coaxial cable at Chase Machine in the Panhandle Area Council Business Center in Hayden next to the Coeur d'Alene Airport.

When Matt King needed more space and financing to develop portable iPad chargers for pilots, the Panhandle Area Council assisted with the takeoff.

"Our new project required additional space and funding, and PAC was there to help," King said.

The business is among those that lease space at PAC's incubator business center next to the Coeur d'Alene Airport.

The trend among clients at the center, PAC Executive Director Wally Jacobson said, isn't millennial business owners developing gadgets for the future. It's entrepreneurs in their mid-40s and up.

"They've worked for the man; now they want to be the man," said Jacobson, adding that there's a waiting list to occupy space at the center because small industrial space is in demand. "Probably half of them still have other jobs."

Companies at the center are varied and also include, but are not limited to, North Idaho Cider, Chase Machine, Bombastic Brewing and Lake City Cakes.

"It can't be niche-focused because we're not a big enough area for that," Jacobson said.

PAC has been partnering with North Idaho businesses and governments for nearly 50 years on economic development efforts.

"We provide a needed resource, but we don't have to be on the front end of projects," said Jacobson, adding that PAC keeps a relatively low profile while interfacing with other groups such as chambers of commerce and the Coeur d'Alene Area Economic Development Corporation (Jobs Plus). 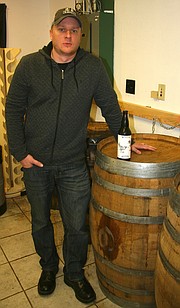 Philip Hottenstein, of Bombastic Brewing, stands next to a bourbon barrel and bottle of his company's brew at the Panhandle Area Council Business Center in Hayden.

"The focus is on getting jobs done and collaboration."

Philip Hottenstein, of Bombastic Brewing, said he took a business development class offered through PAC to help the company get off the ground.

"Being here helped us get started without a lot of out-of-pocket expense," he said. "Now the business is thriving."

One of the most exciting economic frontiers in North Idaho that PAC has assisted is the "aerospace cluster" that has formed and is expected to expand, Jacobson said.

"That's a cluster we're trying to build here," Jacobson said. "We've helped with financing, expansions and technical assistance. Our region is not just focused on Coeur d'Alene; it's more of a regional perspective. The road between here and Sandpoint is getting bigger and not an 'us against them.' It's us against the world."

Jacobson said the aerospace effort is particularly attractive because that industry typically doesn't outsource much work to other countries.

Bryce Proctor, a manufacturing engineer for Global Navigation Sciences, works on the design of a portable charger that will be used by pilots at the company's shop at the Panhandle Area Council Business Center in Hayden. 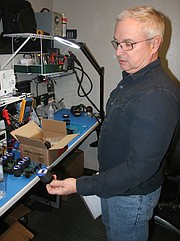 Matt King, owner of Global Navigation Sciences at the Panhandle Area Council Business Center in Hayden, shows a portable iPad charger that will be used by pilots and is certified for flight decks.

When interviewed in early November, Jacobson said there aren’t any new aerospace business announcements but interest remains high. He hinted that at least one announcement might be made by the end of the year.

"We see a lot of medical and aerospace opportunities here," he said. "With medical, it's not just doctors, nurses and support staffs, but also information technology."

"PAC owns some buildings and leases them back," Jacobson said. "The carrot is, if companies continue to renew their lease over 20 years, they can get the facility for a dollar. It's a way to get facilities built.

"Public safety buildings are easy for us because we don't want any of those back but they are a need and necessity. At one time, it was more difficult to get bonds passed, so this was a tool to get a facility built."

"Banks don't typically finance startups, so we provided them a startup loan," Jacobson said. "They've gone from a garage to a large facility in Riverbend."

PAC formed several urban renewal agencies in the region, including in Coeur d'Alene, Spirit Lake, Harrison, Sandpoint and Dover. It currently manages the agencies in Dover and Bonners Ferry.

PAC has been hired by CDA 2030, a community nonprofit, to create an eligibility report for a possible urban renewal district in the area of Kootenai Health.

"We try to give gray matter some definition," Jacobson said.