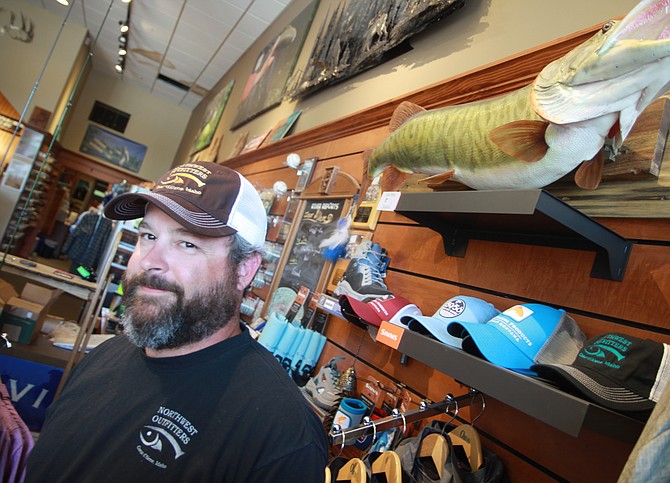 Mike Beard is looking forward to it.

His next adventure is unprecedented.

Beard, the owner of Orvis Northwest Outfitters fly shop and guide service at Riverstone, recently secured a guide permit for the lower Coeur d’Alene River from Harrison to Cataldo. The 40-plus mile stretch of river includes the Chain Lakes, the fish-rich backwaters known as solid pike and bass fisheries.

Beard’s group — he employs eight guides in the summer — usually sticks to the North Fork of the Coeur d’Alene River, where they put sportsmen on fish from the headwaters to the South Fork.

Motoring on the big waters of the lower river chasing warm water species will be a whole new calculus and a worthwhile endeavor.

“We have some learning to do,” Beard said.

One of his guides, Ryan Allen, likes the idea.

“It will be awesome,” Allen said.

On this summer afternoon in peak season, Beard and Allen are taking it as easy as they can.

While other guides are out with clients, the two men answer phones, book guide trips, fly-casting classes and accommodate the customers who come in looking for boots, hats, flies and rods and stream reports.

Representatives from Bozeman-based Simms, who pitched the latest gear and packed boxes into the shop earlier in the day, linger, talk about fishing and consider a long drive east back into Montana.

Beard grew up in Moscow, fishing North Idaho rivers as often as time allowed. The first fish he remembers catching as a child with a fly rod was a sparkling brook trout that seemed to drip colorful diamonds of light into the palm of his hand. Like the fish, he was hooked.

After high school he went away to college in Oregon. He earned a degree and took a job in the insurance industry but something didn’t seem right. A return trip to his Idaho stomping grounds made him realize his passion.

“I just wanted to fish and be a guide,” he said.

By 2006 he was working for the Northwest Outfitters shop on U.S. 95 near the Silver Lake mall. Two years later, when the shop moved to Riverstone, he and Pat Way were its managers. The men purchased the business a year later. Almost three years ago, Way left the enterprise, leaving Beard as its sole proprietor.

Beard and his wife, Teresa, also an accomplished angler and guide, offer a variety of services, information, classes — including many women-oriented — and in their spare time, usually in the winter when Beard isn’t entertaining fly tiers over coffee at the big table in the shop, they chase steelhead.

The shop, in its 10th year at Riverstone, sells gear from a variety of well-known manufacturers including Orvis, Winston, Sims and Korkers, a trove of flies, streamers and other cool stuff such as photographs, fish replicas and art works from local artists and artisans. Guide Greg Ford replicates trophy fish like the musky hanging over a rack of shirts, and Allen paints and sells his wooden pyrographs in the shop.

It’s not just anglers and guides who roam the homegrown shop when they aren’t on the water.

The store has two shop dogs.

Lana the black Lab and Marty the border collie greet customers with a wag. But their role is limited.