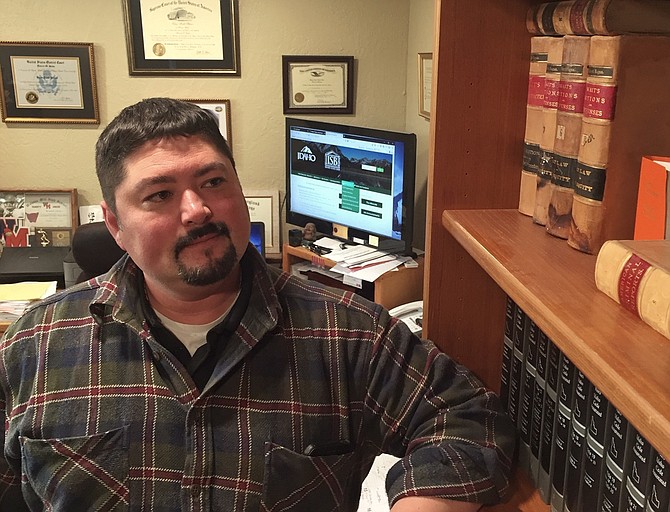 Kinzo Mihara’s approach to the law is two-handed.

He is equally accustomed to the hand shake and the hand on the shoulder. While on the other he relishes the academic.

For someone who majored in football and wrestling in high school — he was ranked 8th in Maryland at one time — and whose bad grades prompted him to drop out of college and join the Marines Corps, dexterity may seem like a long shot.

But Mahara, a Coeur d’Alene attorney with a private practice on Third Street, is equally at ease with the discipline and bulldog determination he learned in sports, and the eloquence and intellectual analysis he learned at the University of Idaho Law School and his decade practicing law in North Idaho.

His training in the profession includes working as an attorney for Howard Funke & Associates PC in Coeur d’Alene and another private firm, and in 2013 Mihara was selected as a Leaders in Law honoree by the Idaho Business Review. The annual kudos go to attorneys for leadership in their profession in the communities in which they live.

Mihara, who now runs his own business as a private Coeur d’Alene attorney, doesn’t take the accolades lightly, and aside from a plaque in his office he doesn’t carry them on his sleeve.

Being down to earth is a desirable trait in a North Idaho whose modest working class foundation is built on humility.

“I treat everyone the same,” Mihara said. “I’ll have a millionaire sitting in that chair, and an hour later it might be a guy who rode his bicycle because he can’t afford a car.”

If Mihara’s demeanor and wardrobe have a say, they would affirm his pragmatism.

He prefers desert camouflage boots, jeans and a flannel shirt to the suits and ties hanging in his office closet that he uses to “church up” when he goes to trial or has a court hearing in front of a judge.

Mihara’s affinity for the law began as a boy, he said. The idea that laws were not just for kids, but that grown ups must face consequences for not following rules, was an eye opener to a boy accustomed to pushing the limits.

“I was a knucklehead,” he said. “I was always getting in trouble.”

After his high school years that were heavily influenced by sports Mihara attended college, performed poorly and switched to the military as a way to save face.

A temporary reprieve from school did not lessen his desire to study the law that his mother had referred to all those years ago.

When he joined the Marines, he asked for a job with the judicial advocate general’s (JAG) office, was humored and sent to become a mailman — a man of letters — instead, before joining a drone unit and working as a general’s aid in Washington.

He funneled all those experiences, he said, into his studies at UI where he earned his law degree and met his wife, Hannah, a North Idaho native. The couple has three children.

After several years working for other firms in Coeur d’Alene, he opted to strike out on his own.

In his basement office at 923 N. Third St. Mihara has gathered the tools of the trade: He started the business with a client list that included the people and companies he had represented in the past. He purchased computers, printers and meticulously organized his shelves with the law books he still refers to in a pinch, although computer software is indispensable.

He made the decision to fly solo, he said, because it suits him. As a private attorney he is available for a variety of cases that include criminal and civil cases.

“I made the business call,” he said. “This is a family business. When someone walks in here it is often because they are facing one of the biggest issues in their life.”

He approaches them with a handshake and a hand on the shoulder. And then the work begins.