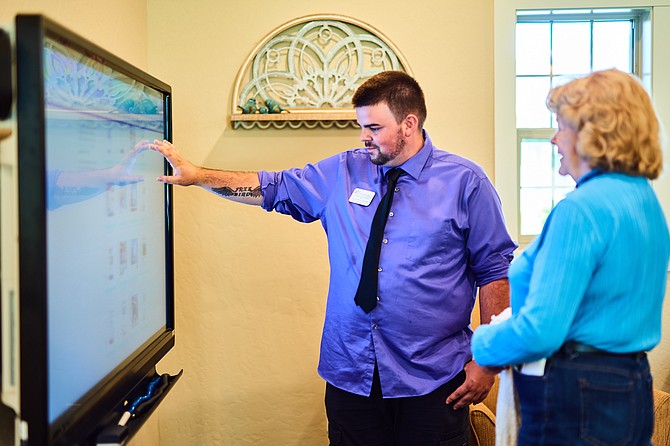 That’s what the staff of The Renaissance at Coeur d’Alene believes. The assisted living community has implemented a new media platform that’s making a difference for residents, especially those with dementia.

The system — called iN2L, short for “It’s Never 2 Late” — is an interactive, touchscreen-based computer. Featuring more than 4,000 pieces of content, iN2L gives seniors the power to connect with family through social media and provides cognitive stimulation, as well as health and wellness program.

The Renaissance has five iN2L units, one for each of its buildings, as well as a mobile unit.

Residents can use internet tools for email, accessing websites or connecting with friends and family using Skype. These features are especially valuable to residents with families who live far away.

“It breaks down the walls between staff and residents,” Renaissance life enrichment director Jacob Bonagofski said.

Group activities like trivia or karaoke can be used to strike up conversations help residents and staff get to know one another on a deeper level.

“Sharing is one of the biggest things our residents like to do,” he said.

One took makes sharing easier than ever — the My Story app, which asks residents and staff to share facts about their life with others in the community. Individuals and their families can even upload photos to the app.

Having this information always at hand is helpful, especially for residents with memory or cognitive difficulties.

The system’s tools can be personalized to meet the needs of individual residents. Bonagofski recalled a resident with dementia who opened up after using iN2L.

The resident had immigrated to the United States from Germany. Through iN2L, she and Bonagofski accessed Google Maps and explored the village where she grew up. The familiar sights brought other memories to the surface: She spoke of her childhood, pointing out the hills she walked through to get to school.

She also shared tragic memories. The resident survived a concentration camp during World War II. She recalled a mother who gave what little food she had to her child, only to discover later that the food was poisoned. The child died.

“She was happy to share those memories that she wasn’t able to remember in a long time,” Bonagofski said.

The experience also brought them closer together as resident and caregiver.

Bonagofski said that’s just one example of how valuable iN2L has been to Renaissance residents, staff and families.

“It takes a village,” he said. “If we all work together, the residents are going to have happy lives.”