An American dream of red, white and blue – and lavender 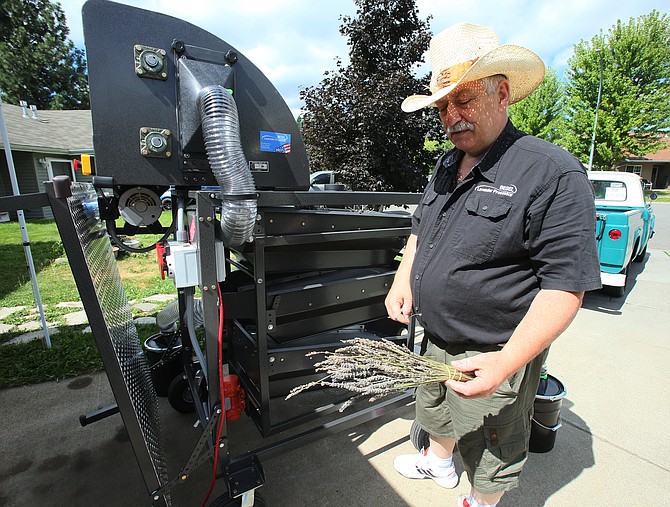 Ricardo Besel prepares to conduct a demonstration of the Besel Lavender Processor in his Coeur d’Alene driveway. DEVIN WEEKS/BJNI

A job that normally takes lavender farmers a half-hour has been conveniently — and aromatically — reduced to a few seconds, thanks to the Besel Lavender Processor.

Locally designed and crafted by Coeur d’Alene resident Ricardo Besel, this one-of-a-kind processor saves exponential time in de-budding and removing dust as 35 to 50 pounds of lavender per hour is prepared for cosmetics, perfumes, cooking and other uses.

“This one is No. 20,” Besel said, gesturing to a machine in his driveway as he prepared for a demonstration Aug. 7. “This one’s going to New Mexico.”

With a whoosh and whir, the machine comes alive. As Besel feeds lavender bunches in and out of the thresher, the rotary brushes spin and sifters sort, using micro-vibrations and air. Hoses on the machine extract impurities and send them to receptacles around the machine. The lavender buds are swiftly funneled out with a centrifuge vacuum system, producing a perfectly clean and fragrant product.

"The problem that the farmers used to have before is that to do it manually, you need to spend 30 minutes,” Besel said, his hand full of lavender buds. "The machine can do it in three, four seconds. When you have a farm, usually a farm has between 2,500 and 20,000 plants. And it’s not possible to do manually, and the quality will never be the same."

Generations ago, lavender would be thrown in the wind to remove the lavender dust, Besel said.

"You cannot use any kind of lavender with dust because it’s toxic,” he explained.

Then farmers used fans to produce wind that would eliminate the dust.

Ricardo and his wife of nearly 18 years, Cecilia, are dedicated to making quality machines and forming positive relationships with their clients.

This is their American dream.

Ricardo was born and raised in a German colony in Argentina. He grew up in agriculture, surrounded by farm equipment and different crops. He attended a technical school and worked in his grandfather’s shop when he was young. His grandfather was an import agent and a tractor/farm equipment dealer.

At 20, Ricardo met a Scottish engineer who was one of the first lavender growers in La Cumbre, a small town in central Argentina. This planted the seed for him to create his life around the fragrant purple flowers.

After Ricardo moved to the United States in 2000, he opened his own company. He and Cecilia were both born in Argentina but met in Florida when they were learning English and working toward obtaining American citizenship.

Later they moved to Coeur d’Alene, where Ricardo designs and manufactures the lavender processing machines and Cecelia manages their social media, creating customer testimony videos that emphasize the enthusiasm and gratitude of their clients.

The idea for these processors came to Ricardo after visiting a lavender farm in 2016. That’s when the first prototype was created and tested, and the first was sold in 2017.

In January 2019, the Besels were invited to South Carolina by the United Sates Lavender Growers Association to attend an annual conference. It proved to be a boon for the Besel business. With no PowerPoint or fancy presentation, Ricardo simply shared his knowledge and gave a demonstration of the machine.

"When he finished, everyone stood up and clapped," Cecelia said.

Following the demonstration, the Besels walked down the block for a cup of coffee. They were approached by several people who attended their session. By the time they made it back to the convention, they had sold three machines.

"It was so explosive after that," Ricardo said.

The craftsmanship and care that goes into each processor is also invested in the relationships the Besels forge with their customers. They drive across the U.S. to hand-deliver their product and meet their buyers face to face. Last year they drove more than 90,000 miles, making many friends along the way.

“The people say, ‘Why don’t you deliver by UPS or send somebody?’” Cecelia said. “I say, ‘It’s not the same.’ They’re waiting for us, then we eat together dinner.”

Word has gotten out about these processors. As the first machine of its kind, lavender farmers everywhere are taking notice. The Besels now have customers across the U.S. and around the world in Croatia, Latvia and other locales.

“Last month, some people from Germany told me, ‘You cannot find equipment like this in Europe,'" Ricardo said.

The machines go for about $15,000, and the Besels are willing to work with customers on financing. They weigh about 700 pounds but are on wheels and easy for one person to transport.

"We have an organized system to build the machines," Ricardo said. "It starts with the order or materials that are cut by laser."

After that, the different parts come together by welding and powder coating paint and the Besels assemble the pieces. Electronic components give it the final touch. Total production time for one machine: about two weeks.

"Usually, we drive the machines to a nearby lavender farm and run an intensive test on site," Ricardo said. "I remember the first customer, who wanted that prototype in 2016. It was a joy to read a comment where she comments in 2017. She is still enjoying her machine."

Ricardo Besel, creator of the Besel Lavender Processor, discusses the convenience his machine provides as he prepares to feed lavender bunches into its thresher. 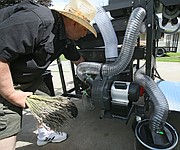 The Besel Lavender Processor is a one-of-a-kind machine that automates de-budding lavender so farmers no longer have to process it by hand. Designer and creator Ricardo Besel, of Coeur d’Alene, is seen here during a demonstration.

The Besel Lavender Processor rotary brushes spin and sifters sort, using micro-vibrations and air. Hoses on the machine extract impurities and send them to receptacles around the machine. Lavender buds are funneled out with a centrifuge vacuum system, producing a clean and fragrant product. Creator Ricardo Besel is seen here showing how to use the machine.

Ricardo Besel’s lavender processor, designed and made in Coeur d’Alene, reduces debudding time for lavender farmers. This machine gets the job done in about six seconds, where by hand it can take up to a half-hour to debud and clean bunches of lavender for uses in aromatics, cooking and other products. 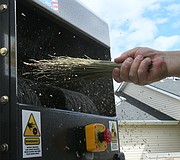 Dust and buds shoot off a bunch of lavender as it spins into the Besel Lavender Processor during a demo.

Clean and dust-free lavender buds are ready for a variety of uses once it goes through the Besel Lavender Processor, a unique machine designed and created in Coeur d’Alene.