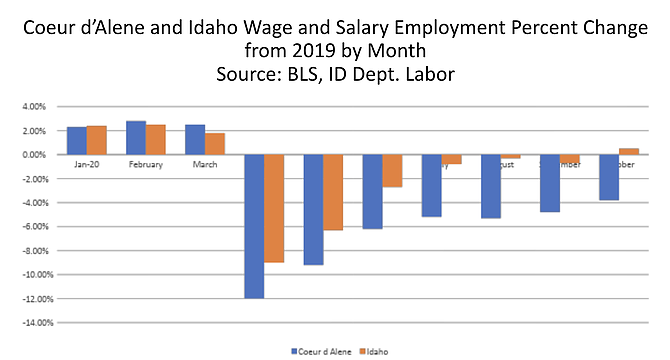 As 2020 mercifully fades into history, the calendar change allows an opportunity for reflection and hope.

The recovery that started last spring surged in the third quarter as restrictions were lifted and some activities resumed. The 33.1% growth rate of the third quarter was a onetime event as businesses reopened and consumers emerged. Employment growth has now been slowing for five months.

The fall surge in COVID-19 cases and reimposed restrictions are weighing on performance. There are short-term concerns with the looming end of federal support, and the expectation of additional cases after the holidays. At the same time, the approval of vaccines and the start of vaccination programs around the world offer hope that the end may be in sight.

Employment has continued to recover with a 245,000-net change in November, but it remains 9.8 million jobs below the February number. The spring employment collapse was cushioned by the massive fiscal support in the CARES Act: $1,200 checks, extra unemployment compensation and extended eligibility and forgivable PPP loans.

Idaho transfers in the second quarter rose at an annual rate of 684.6 percent. These programs have expired or will expire at year end in the absence of new legislation. Congress is currently passing an additional support measure amounting to about $900 billion including more individual payments and unemployment compensation.

The Federal Reserve has pushed rates to near zero and is buying $120 billion per month of government and mortgage-backed securities. The low interest rates along with increased demand have helped drive the housing sector’s strength as well as boosting financial asset prices.

Consumption, investment, and housing have been moving up accompanied by income and employment growth. The 2021 national economy is expected to continue to rebound in the 3-4% range, implicitly assuming a vaccination program and some continued federal support.

The path, however, is very uncertain. The recent slowing, possible end of some income support programs, and the risk of post-holiday outbreaks are threats to spending and economic activity. As we move into the second year of the pandemic, some of the damage that has been hidden by deferrals, forbearances, and eviction moratoriums will become apparent.

A very successful vaccination program that restores confidence and makes people more comfortable in crowds or while traveling is an upside risk. A relief spending surge as happened after the 1918-20 Spanish Flu or the Black Plague in 1340 (neither of which I remember) could also appear. The Biden Administration will bring a new cast of characters and different approaches that are still uncertain, as is control of the Senate.

As the expansion continues, the nation will not go back to February. The pandemic has been an accelerant to trends that were in place earlier. Online shopping was growing but not at the pace we have seen this year. Digital payments, telemedicine, regional dispersion, and digital divide concerns are all accelerating or attracting renewed interest.

The disproportionate economic carnage to low-income households has highlighted the regressive nature of this episode and inequality. In 2021 we will get a better idea of whether the changes in behavior and patterns that have emerged will wither or persist. Working from home or remotely? Eating at home or out? Fear of traveling and crowds?

There are going to be long-term implications of the episode in the years ahead. The ongoing disruption of education can have lifelong impacts. Premature retirements and people staying home to care for children or from fear reduces the size of the labor force. Increased risk perception may dampen entrepreneurial activity; how many of us worried about pandemics or government ordered shutdowns of business last year?

Millions of survivors may have long-term health issues from COVID-19 infection — cardiac, renal, and pulmonary. Millions of people will be faced with the prospects of changing jobs because the old business will not be back or will operate differently. This happens all the time, but the pandemic has accelerated the process and highlighted the need for assistance.

E-commerce and distribution activities have created hundreds of thousands of jobs as airlines, performance venues, oil and gas extraction, hotels and restaurants have shed thousands of jobs.

All 50 states saw year over year declines in employment in the late spring, with tourist-related economies like Hawaii and Nevada the hardest hit.

Employment is rising and as of October, Idaho was the only state in the nation with positive year over year employment growth, according to Job Growth Update. Idaho employment was up .5 percent over the year. The state’s industrial mix and more modest restrictions as well as the influx of people and activity help explain the relative performance.

The accompanying chart shows the year over percentage changes in payroll employment by month in 2020 for Idaho and for Coeur d’Alene. The dramatic decline and the ongoing recovery are evident.

Similarly, all states had rising home prices in the third quarter in the FHFA House Price Index data, but Idaho topped the list. Idaho is expected to see employment growth of 3.3% in 2021 after a decline of just under 2 percent in 2020, according to the WBC Consensus.

In Coeur d’Alene, April employment was 12 percent below April of 2019 and as in the nation, employment has been increasing. In October it remained 3.7 percent or 2,600 jobs below 2019. Leisure and hospitality employment was down 50 percent in April and while increasing was still down 19.4 percent in October. Other sectors down over the year include construction, professional and business services, and government.

Moving into 2021, assuming that leisure and hospitality will strengthen with the vaccine and increased confidence, this headwind will diminish. The continued migration to the area will remain a driver along with regional strength in mining, forest products, distribution, and business services. The attractiveness of the Spokane-Coeur d’Alene area has probably been enhanced in our changed world with more locational freedom. Time will tell.

Looking ahead at 2021, we must remember that WE ARE NOT THE WAY WE WERE. We have seen people’s behavior change: Some of the shifts are likely permanent, some firms are or will be gone, and people’s lives will be disrupted. Policy makers will be challenged at national, state and local levels. There will be long shadows from this episode.

John W. Mitchell was a professor of economics at Boise State University for 13 years before joining U.S. Bancorp in 1983. He was Chief Economist of U.S. Bancorp until July 1998 and served as Economist Western Region for US Bank until July 2007. He has been making economic presentations on the nation and the region for almost 50 years.

Dr. John Mitchell gives a presentation on economic incentives in 2017 before a packed house at the Best Western Plus Coeur d’Alene Inn.