At last, an antidote for business jargon poison 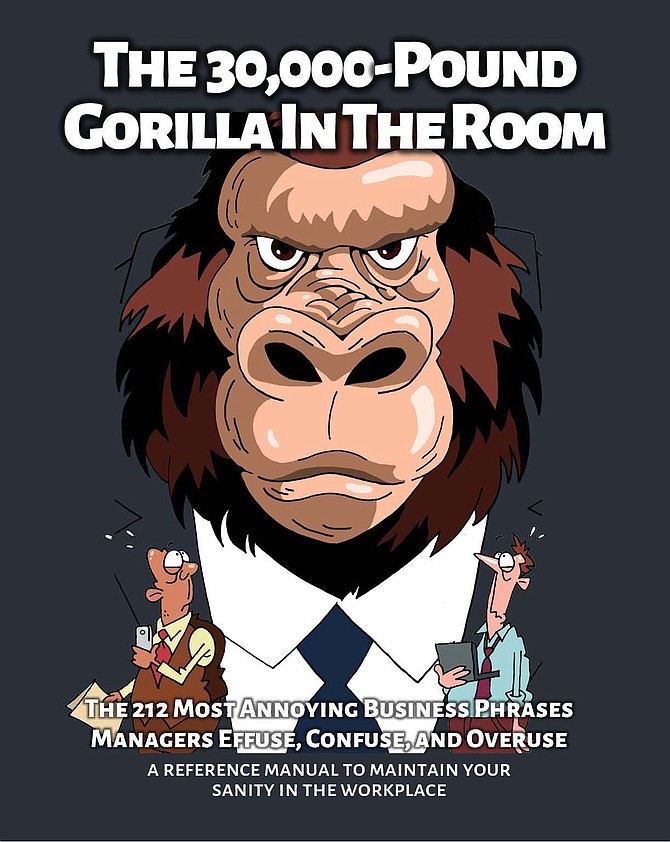 Steve Stauning peered into the pit of business jargon hell.

Like brimstone blasting a gentle nose, the Post Falls-based business owner, consultant and author was repulsed by what he smelled there.

Its name was Foul.

Stauning could’ve donned an ecclesiastical collar and attempted to exorcise those damned phrases forever from the consciousness of man.

“Spawn of Satan, Game Changers who Drink from a Fire Hose whilst ye Do a Deep Dive seeking a Win-Win Scenario, I banish thee back into the fiery Optics of Paradigm Shifts and Smell Tests!”

He could’ve done that, but instead he did this: He wrote a book with his eldest son, Carson.

That book, gloriously entitled “The 30,000-Pound Gorilla in the Room: The 212 Most Annoying Business Phrases Managers Effuse, Confuse, and Overuse,” is now available to every victim of business jargon abuse seeking redemption — or revenge.

Stauning delights in telling the tale of the title.

“An up-and-coming young manager where I was working told a group of other managers and senior executives, ‘I think it’s time we all addressed the 30,000-pound gorilla in the room,’ Stauning recalled in a recent Business Journal of North Idaho interview. “The room fell silent… the awkwardness grew… the young manager shut his mouth for the rest of the meeting… and the perfect title for this book was born!”

One might say it takes impressive business jargon dexterity to come up with a trifecta of cliches — 30,000-foot view, 800-pound gorilla, and an elephant that may or may not look like a primate hanging around the room — in one desperate grab, but our world is full of such fools. Stauning’s stunning young manager was simply one of the more lamentable.

In explaining his motivation behind The 30,000-pound Gorilla, Stauning summarizes it succinctly:

“From the meaningless to the overused to the cliched, we are inundated daily with annoying and ridiculous business phrases from the lips of otherwise well-meaning (and not-so-well meaning) professionals.

“Why so many of us (present company included) rely on the latest catch phrases or tired business jargon to relay a simple message is unclear. Whether lazy, blocked, or we just think it makes us sound important, we too often reach for prepackaged word groupings instead of constructing an original thought.

“Perhaps this book can help us quit…though I doubt it.”

BUSINESS JOURNAL OF NORTH IDAHO: Before we get down to, um, business, how came Clan Stauning to Post Falls, Idaho?

STEVE: My wife, the former Michelle Bernier, grew up in the Coeur d’Alene area, and her parents still live here. So, we had been coming back to visit every summer and most Christmases for almost 20 years. The area is so beautiful, and the people are so friendly, that we knew we would eventually retire here. However, when I started my own consulting business in late 2009, we realized we could live anywhere we wanted — I just needed to be near an airport. With that, we moved to Hayden from Georgia in 2010, and relocated to Post Falls in 2014.

BJNI: Assuming — very possibly, incorrectly — that this book doesn’t bring in millions of bucks, how do you primarily make your living? What about Carson?

STEVE: Writing books is more catharsis-driven than profit-driven. Which is great, of course, because self-publishing is (so far) not the way to make millions.

In 2009, I left my position with a Fortune 500 automotive dealership group based in the Atlanta area, and started a training and consulting business (pladoogle, LLC) focused on helping dealers and OEMs leverage digital marketing and improve their sales processes. At some point, all three of my sons — all graduates of Lake City High School — have completed work for my business, though Carson was always the most involved because he’s the oldest of the three.

CARSON: When I joined pladoogle, I didn’t realize one of my primary duties was to co-author a book about annoying business sayings. However, growing up with a consultant father meant I had firsthand experience with someone who constantly overuses annoying jargon and other business clichés.

BJNI: We’re going to have to explore those feelings a bit later, Carson.

STEVE: Today, Carson manages the company’s marketing efforts, our video production and editing, and he designs and builds the business intelligence reporting for our clients. On top of that, he’s a co-owner of a Boise-area service business. He’s definitely keeping himself busy since graduating from Boise State.

BJNI: So how specifically did the co-authorship gig come about?

CARSON: My dad had already written a couple of books — one, an automotive sales training book (Assumptive Selling) that’s thicker than most encyclopedias; and the other, a fun and easy read about how life’s not fair (Sh*t Sandwich) that he wrote for me and my brothers — so, I knew he was capable of writing this one alone.

STEVE: The problem was that every time I sat down to finish the book, I was exhausted from traveling, training, and consulting. My business was keeping me very busy, and I needed help with both the business and the book. That’s when I asked Carson to come work with me full-time.

STEVE: The idea had been in my head for years, as I had been collecting annoying business sayings for about a decade. I kept a file on my computer desktop where I would jot down anything I heard during a conference call or business meeting that made me cringe. Eventually, I had 100 of these dreadful words and phrases, and decided it was time to start the book.

CARSON: I thought it was funny that he found these phrases so annoying because he was using them every day. He was and is one of the worst offenders of overusing annoying business jargon that I’ve ever met. He claims he’s trying to cure himself of this affliction, but I haven’t seen much improvement despite writing and releasing the book.

STEVE: After I had 100 annoying phrases that I wanted to include in the book, I asked Carson to start contributing. Because he lives in Boise, our collaboration had to be remote. So, we used Google Drive to allow us to both work on the same document whenever we had the time.

STEVE: The project started with just the list of annoying words and phrases, though for each one we needed to write a few interesting (and hopefully funny) paragraphs on what made it annoying and perhaps its origin. We needed to describe a funny scene using each phrase that our illustrator could turn into a cartoon, and we wanted to have a replacement phrase that readers could use to be less annoying to their coworkers.

STEVE: Carson’s job at this point was the same as mine: Finish the book with the 100 phrases we already had. Then, I heard something equally irritating that had to be added. Then, Carson would add a phrase or two, and so on. Eventually, we had over 200 annoying phrases, and the list was still growing.

CARSON: We knew we’d never finish the book if we kept adding phrases, so we made the decision to stop adding anything else no matter how annoying it might be. We were at 212 sayings at that point, and thought it sounded like a nice round number.

BJNI: Co-authorship is never an easy task, particularly when your co-worker has your last name. Did disagreements arise? And who won the resulting arm-wrestling contests?

STEVE: We disagreed on a few of the terms the other wanted to add to the book. Often, this was just because the other person didn’t find them all that irritating. One in particular was price point. To this day, Carson doesn’t understand why that one annoys me so much. Even after we had the lesson and cartoon completed for price point, he was still scratching his head trying to discover what made it annoying.

BJNI: We’re definitely with Dad on “price point.” “Price” will do, dammit. Were there any ah-ha moments? Get it, Ah-ha moments? That should be in there.

CARSON: Once we started working on the book together, I began to listen differently to my friends, coworkers, and managers. I also reflected on much of the annoying jargon I’d heard the professors at Boise State latch onto and repeat. We went from that original 100 sayings to 212 relatively quickly.

BJNI: Steve, your writing is much better than many authors of business-related books — funny, tight and informative. Your book also lacks the typos typically abundant in publications these days. Curious if you’ve been a journalist or had that kind of training — or are simply a good writer and editor.

STEVE: Thank you! I wrote for my high school newspaper in Phoenix (’77-’81) and had wanted to be a journalist. I went into the Marine Corps (’81-’85), then to Arizona State where I started as a journalism major. I would’ve graduated with a journalism degree if one of the professors hadn’t introduced us to the expected starting wage for reporters during my freshman year.

BJNI: Thanks guys. How can people get their mitts on one of these babies? Need all the purchase info, please.

STEVE and CARSON (in unison): The 30,000-Pound Gorilla in the Room: The 212 Most Annoying Business Phrases Managers Effuse, Confuse, and Overuse is available for $19.97 on Amazon.com.

Steve Stauning is a husband, dad and consultant/author with business savvy, wry wit and a penchant for clean prose.

Michelle (Bernier) Stauning grew up in North Idaho and is a 1985 graduate of Coeur d’Alene High School. She teaches 4th grade at Ponderosa Elementary in Post Falls. 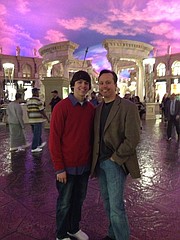 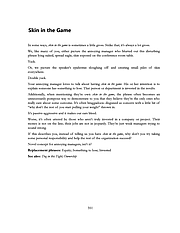 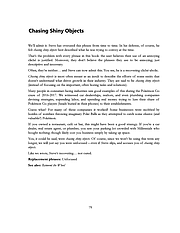 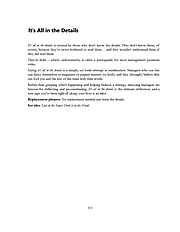 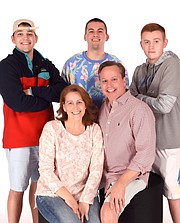 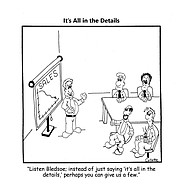 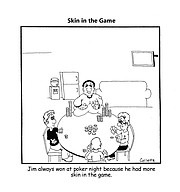