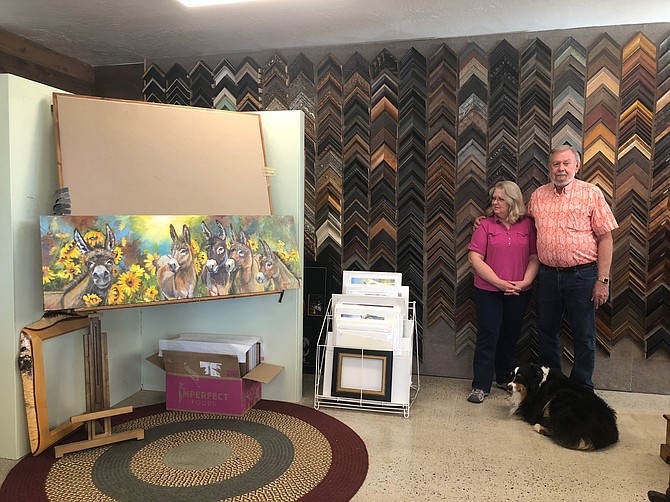 In business, consistent good service rather than location is key.

Which is why Lynee Richards and Merlin Berger of Frame of Mind are unconcerned about their move from downtown to Midtown, 4th Street and Locust Avenue.

Downtown Coeur d’Alene is prime real estate for some, but Richards believes service makes a greater difference than location, especially for a “destination business” like Frame of Mind.

Berger says the shop has been looking to move for years, since before the passing of his wife and former co-owner Sharon Berger in 2014.

Still, that’s not to say there’s no love lost for the shop’s home of over 35 years.

“Downtown was good to us, and I think we were good to downtown,” said Berger.

“We’re not down there very often anymore, but we were down there after Toro [Viejo] was able to reopen,” said Richards. “They were like family.”

“If you continue to offer the same good service you did before, then nothing should change,” Richards said.

Ensuring that “good service” helped motivate the move to Midtown.

“The main reason for moving [here] was to consolidate our workroom onto the main floor,” said Richards.

“This way it’s all on one floor and I’m here to see them when they come in the door.”

At the Second Street location the workroom for the custom-frame shop was located downstairs, which meant Richards or Berger went back and forth to serve customers in person and through custom orders.

One floor means greater efficiency — and a little less legwork.

“Boy, what a difference! No stairs!” Richards said. “It’s just much more convenient.”

No stairs conveniences Frame of Mind pooch Willy, as well.

“You wouldn’t have seen him much anymore,” said Richards. “Now he greets everyone.”

The Fourth Street location brings with it another change: An end to Frame of Mind’s secondary role as a gallery, at least for now.

With the custom-frame-making “workroom” taking up much of the new space, there’s no room for a gallery.

But Richards isn’t worried about its loss.

Although the gallery did help to bring in foot traffic when they were downtown, Richards thinks that traffic was “not necessarily for the framing.”

“That’s the main change right now, because we’re just focusing on the framing which is the mainstay of the business, anyway.”

“And that’s a destination.”

As a destination business, customers seek out the shop rather than chance upon it. Because of this Frame of Mind hasn’t been as strongly affected by COVID-19, although it wasn’t considered an essential business, Richards said.

“Because we are a destination business I don’t think we’ve been impacted at all other than the supply aspect of it,” she said.

“For us the biggest thing is just being able to get supplies.”

Many of the materials required in framing, including glass, paper and mats, have been difficult for the Coeur d’Alene business to obtain recently.

Frame of Mind gets much of its supplies from Washington, which had a stay-at-home order in effect. As the custom-framing business is not considered essential, that also made it more difficult to get supplies.

“Other than that it’s a normal spring for us,” she said.

In general, Richards stressed that what the custom-framing shop does is fundamentally the same as before.

“The space is allowing us to be more efficient,” said Richards, “and what we do has not changed.”

Neither has the fare.

Frame of Mind may no longer be neighbors with Calypsos Coffee Roasters, but Richards continues to offer her customers a fresh brew — one of her own making.

“I’d have customers telling me I was missing them if I didn’t,” she said with a laugh.

In the shop, Berger launched into a discussion of Coeur d’Alene’s art scene of the past and a critique of those who buy art “because they think it’s gonna increase in value.”

“The real true art lovers are the people who buy art because they like it…But you didn’t come here for a lecture,” Berger joked.

“That’s what we’re all about,” Richards added.

Likewise, Frame of Mind customers likely won’t visit for the shop’s location; they’ll come for the expertise — and the “same good service.”

Richards, Berger and Willy pose with the Frame of Mind sign in the framing business’ new shop. Although a few things have yet to be placed (or hung), the shop is open for business - with coffee and treats and waiting.

The new shop space allows for the “workroom” and main shop to coexist on the same floor. Richards says this allows her — and faithful pooch Willy — to greet customers more easily, without having to run upstairs.

The new shop space allows for the “workroom” and main shop to coexist on the same floor. Richards says this allows her - and faithful pooch Willy - to greet customers more easily, without having to run upstairs. 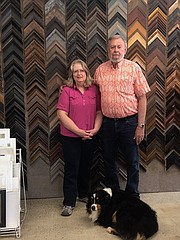