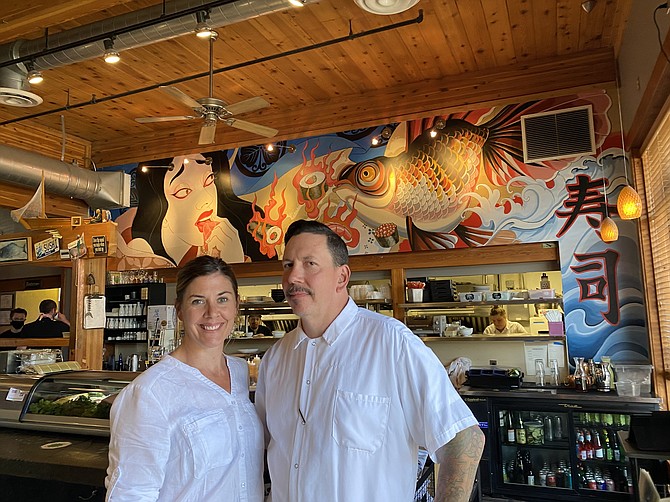 Opening a restaurant is hard enough. Try opening four with all different menus.

Viljo and Autumn Basso, the masterminds behind Syringa Japanese Cafe & Sushi Bar, the Garnet Cafe, Midtown Bluebird, White Pine at 814, and Monarch Ramen & Noodle have been leaders in the Midtown restaurant scene since 2006. Through all their eateries, the two pay homage to Idaho by naming locations after state symbols.

“Syringa sounded like a pretty name and we wanted to keep to our roots and have that be our thing,” Autumn Basso said. “When we started working on our second location it was tough to come up with names so we said let’s keep our theme of state monikers.”

Their first food baby, Syringa, opened 14 years ago in 2006 after the dynamic duo decided to take their love of the industry into their own hands.

“With Syringa, we knew we wanted to open a restaurant and looked for what niche could be filled in the area, and one of those was sushi,” Autumn said.

She was right. Before moving to their new location in 2018, it wasn’t uncommon to see a line out the door to eat from Syringa’s extensive menu. From the Spice Duck Tataki to the Tiger Eye Roll, and their Katsu Don Donburie, there is no end of umami flavors.

Their second venture, the Garnet Cafe, opened in 2008, two years after the success of Syringa. Garnet was different, however. Never being the owners of the restaurant, the Bassos wanted to try their hand at helping open a restaurant specifically to sell. After the previous business went under, the landlord was looking for someone to move in and Viljo and Autumn figured they would give it a try.

“It had always been a plan to get a restaurant up and running to sell, just to see if we could,” Autumn said. “When the space became available we decided to give it a shot.”

Garnet was eventually sold to Justin and Angeline McLane in 2014 and is now owned by local businesswoman Kristin Von Till.

Next came Midtown Bluebird, a perfect smorgasbord of all the foods Autumn and Viljo enjoy. With gooey sandwiches, handpicked drinks and colorful salads, Bluebird is ideal for even the most finickiest eaters.

“We’ve got loco moco, mac and cheese, hamburgers, and vegetarian dishes,” Autumn said. “It’s a bistro flair with tons of influences from our travels through the Northwest over the last 20 years.

The most popular items on the menu? Everything.

“The parmesan-crusted halibut is always a favorite when it’s in,” Autumn said. “The cougar gold mac and cheese is from a creamery by Washington State University, and we make a really good bad dad burger named after the restaurant Viljo’s mom originally owned.”

Bluebird’s vibe is a world apart from Syringa’s. Originally renovated by Capone’s Pub and Grill, the dark wood and western styles create a warm, old-fashioned feel for customers. Home to the Birds Nest Wine Club, live music on Sunday evenings, and brunch options on holiday weekends, Bluebird is a Midtown hot spot.

Midtown Bluebird is open Tuesday through Sunday from 11 a.m. to 9 p.m. open till 10 p.m. Saturday and Sunday.

“We keep things pretty simple and the coffee that we make is legit good stuff,” Autumn Basso said.

The house special is the Mocha de Muerte. They make their own Mexican chocolate syrup, as well as boba teas, chai tea lattes, and a super-duper zip fizz with fruit.

Opening White Pine, formerly an office space getting the building up to code, sent the Bassos through the wringer.

“It was nerve-wracking because we had zero clues what we were doing — honestly no clue at all,” Autumn Basso said. “White pine was probably the most stressful and most nerve-wracking for me because I had never been a barista. I didn’t even know how to make a latte.”

Get your buzz on with White Pine Coffee Tuesday through Sunday 7 a.m. to 5 p.m.

Midtown Monarch Ramen & Noodle is sentimental to the Bassos and any long-time Syringa customers. After Syringa moved to its larger location, Viljo and Autumn decided to revamp the old space and created Coeur d’Alene’s newest make-your-own ramen restaurant.

With an influx of newcomers to the area, especially tourists, the Bassos knew they wanted to jump on food trends. At the ramen shop, customers can try house specials named after the duo’s other eateries, design their own ramen dish, or try a brand-new buddha and poke bowl.

“I think there are too many people coming from out of town to be limited with our menus. People want that variety they are used to,” Autumn said. “Having specialty coffee shops and ramen is one of those things people are into right now.”

Midtown Monarch is in full swing down on Fourth Street, serving up hot bowls Tuesday through Sunday from 11 a.m. to 8 p.m.

During the week, customers can find Viljo working on the line at Syringa, Bluebird, or Monarch, practicing the skills he learned while attending the Western Culinary Institute in Portland in 1996.

“Going to culinary school was a good experience for me because it answered the questions that don’t always get answered by just working in the food industry,” Viljo said. “Besides cooking techniques, they really focus on the business side of owning a restaurant — how to run a location, track sales, and be profitable.”

Viljo, born in Longview, Wash., moved to Idaho in 1985 with this family. Growing up in the restaurant industry, Viljo started working at his mother’s restaurant Bad Dad in Oregon, later working in Takara, a Japanese restaurant in Coeur d’Alene.

“From making sushi, ramen, or northwestern-style bistro fare, I like cooking everything,” Viljo said.

Autumn and Viljo met when they were working at Takara. While they eventually moved away to pursue their education, the two returned to Coeur d’Alene in 2002.

Although she started as one of Syringa’s main servers, Autumn says her position has evolved to a behind-the-scenes worker. With over 50 waiters, cooks, and support staff manning the fort at the four locations, Autumn spends most of her days running around making sure everything is shipshape.

“I do the books. I run from place to place making sure everything gets what it needs,” Autumn said. “Our crew makes things happen. Having people we can depend on is probably 95% of our success. Our crew knows what to do — they take care of everything, and we feel super fortunate to have them.”

Whether it’s tempura rolls, honey-miso friend chicken, Doma coffee, or spicy braised pork shank ramen, the Bassos have tried their hand at a little bit of everything. While other businesses might develop a chain of restaurants, Viljo and Autumn like the challenge of trying something new.

“With the diverse background that I have and the desire to not get bored, I think if we started a chain and did the same thing over and over again we’d get burnt out,” Viljo said. “It does feel like we’re running around but that’s always a better thing than the opposite.”

Viljo and Autumn’s favorite restaurant? They don’t have one.

“They’re like kids — I can’t just pick one. I think they are all unique and have their own vibe,” Autumn said.

Despite COVID-19 throwing a wrench into most business chains, the Bassos say their restaurants are still going strong.

“Our community has supported us over the last 14 years but seriously it’s day by day and taking things as they come, but it’s tough not knowing what is going to happen,” Autumn said. “I thank my lucky stars we’re in this community because they are what makes this whole thing work. It’s the community and our staff that make it what it is; we can’t do anything without them. We’re blessed to be a part of it.”

Curbview of White Pine at 814, next to the Midtown Bluebird.

Midtown Bluebird’s old-fashioned theme is carried out through the wood and steel features, noticeable in the bar area.

The inside of White Pine at 814, features classic records, concert posters and trendy decor.

MADISON HARDY/BJNI Midtown Bluebird’s old-fashioned theme is carried out through the wood and steel features, noticeable in the bar area.

MADISON HARDY/BJNI Curbview of White Pine at 814, next to the Midtown Bluebird.

MADISON HARDY/BJNI The inside of White Pine at 814, features classic records, concert posters and trendy decor.