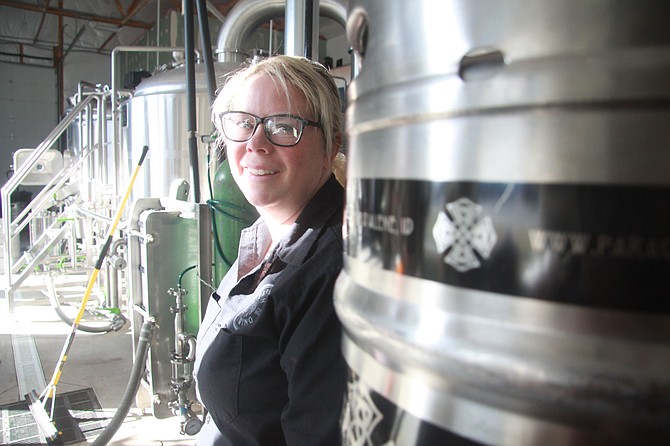 Kerry Kiernes of Paragon Brewing is among a handful of women beer brewers in the region. She said the brewery field offers a great opportunity for women to become head brewers. Photos by RALPH BARTHOLDT/BJNI

Kerry Kiernes met a group of women over beer the other day.

It was a good day for it.

Kiernes, who owns Paragon Brewery in Coeur d’Alene — the name means “model of excellence,” Kiernes likes to interject — belongs to a women’s beer brewing group, which on National Women’s Day holds an annual get-together to teach other women how to brew beer.

“There are amazing opportunities for women as head brewers in the brewing industry,” Kiernes said.

The women’s group — called the Pink Boot Society — brewed a pale ale made with Yakima Chief hops. Part of the proceeds from the sale of the beer goes back into the Pink Boot to help women in the industry.

“It provides financial assistance to help them learn how to brew,” Kiernes said.

When Kiernes and her husband, Chris, both avid homebrewers, jumped aboard the brew wagon, they started with small batches, and much trial and error.

“He had to learn that brewing was not like cooking, where you can add a pinch here and a spoonful there,” Kiernes said. “It was more like baking … it was more precise.”

It didn’t take long before the couple was winning small regional brewing competitions for the quality of their product — which was beer, home brewed in their kitchen.

The kitchen is much bigger now and it has a name.

Before opening its own commercial brew facility, Paragon, at 5785 N. Government Way, was commercially brewing its beer at places such as McDuff’s in Sandpoint and Trickster’s on Schreiber Way. Law changes outlawed the practice of contract brewing and Paragon built its own facility next to the brew pub — formerly Sully’s tavern.

“Before that it was the Time Out Tavern,” Kiernes said. “They were both dive bars, biker bars.”

The pub, with its 48 seats including the bar and nine tables, has outside seating in the summer. There are plans to complete a beer garden this year and Kiernes hopes to add green space on the ¾-acre lot on the west side of Government Way.

On tap are 10 beers with names like Windy Bay IPA and Beauty Bay Blonde, as well as cider. The brewhouse with its stainless steel cauldrons and mixers absorbs sun through its big windows and has the capacity to make 20 kegs of beer — at more than 15 gallons each — at a turn.

Paragon began as an English-themed pub, but the chef who got clients hooked on bangers and Scotch Eggs moved on. Although the kitchen still serves some of the favorites, the menu has changed a bit.

The English sausage has at least temporarily fallen off the menu, but other favorites such as Scotch Eggs and Fish and Chips remain.

Other items include Tachos — tater tot nachos — and Bavarian pretzel with sriracha cheese sauce, wing, and soup and salad.

“They are just a big glob of gooey goodness,” Kiernes said.

Kiernes is a little surprised how some of her menu items have taken on a life of their own.

“Brussel sprouts sell so amazing well,” she said. “People lose their mind over them. It’s quite fun.”

Hand food, grilled or smoked out back, includes brisket sandwiches, and summers include live music outside.

The brew pub, which celebrates its sixth anniversary May 1, uses local art for its decor.

On May 1, Paragon Brewery will celebrate its sixth anniversary as just one of two brew pubs — which make beer and food — in Coeur d’Alene.

As kitchen home brewers Kerry Kiernes and her husband, Chris, began winning small, 5-gallon brewing competitions when they decided to step up their game. The couple regularly produce 300 gallons at a time in Paragon’s brew house.

From its brewery along N. Government Way in Coeur d’Alene, Paragon — which means a model of excellence — sells its beers at pubs throughout the area.

Many of the beers brewed in the brew house, located alongside Paragon’s pub, are named for local features and places and complement the food menu.