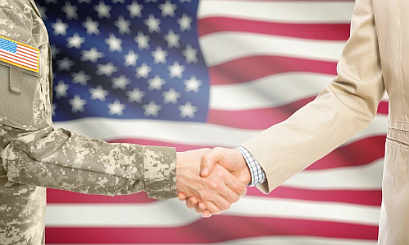 Owners just need to take advantage of the Internal Revenue Service’s Work Opportunity Tax Credit (WOTC) program. Not only will companies get an employee with military discipline and work ethic, they can get huge tax breaks.

Larger companies could save hundreds of thousands of dollars a year. But smaller firms can also cash in.

The program was created in the mid-1990s to encourage companies to hire groups that traditionally had difficulty finding jobs. That included ex-felons, welfare recipients and even victims of Hurricane Katrina.

Veterans were added to the list in 2011, and for good reason. Many had been deployed to combat zones in Iraq or Afghanistan. They served bravely and showed the characteristics any employer would desire.

But that didn’t keep them from being dragged down with everybody else by the Great Recession. The unemployment rate for veterans was 8.7% in 2010.

The economy has improved, and employment opportunities have followed. The veterans’ unemployment rate dropped to 3.4% in September of 2018.

As positive as that is, a lot of veterans still face unique challenges after getting discharged from the military. That’s one reason the WOTC has been extended through Dec. 31, 2019.

So who qualifies for the tax credit program, how much can it save a company and how do firms apply? Here are the answers.

A variety of employment situations are covered under the WOTC. They include:

• Veterans who have a member of their family receiving assistance under the Supplemental Nutrition Assistance Program (SNAP), commonly known as food stamps. That family member must be on the program for at least three months during the veteran’s first year of employment.

• Veterans who were unemployed for at least four weeks but fewer than six months in the one-year period prior to their hiring date.

• Veterans who were unemployed for at least six months in the one-year period prior to their hiring date.

• A disabled veteran entitled to compensation for a service-connected disability that is hired not more than one year after being discharged or released from active duty.

• A disabled veteran entitled to compensation for a serviced-connected disability that is unemployed for at least six months in the one-year period before their hiring date.

• Veterans who fall into multiple categories might qualify employers for more tax breaks.

There is a Short-term Unemployment credit. If an employer hires a veteran who’s received unemployment compensation for at least four weeks, the employer can claim 40% of the first $6,000 in wages. That would be a potential tax credit of $2,400.

There are also a Wounded Warrior tax credits. They include:

• Employers that hire veterans with services-connected disabilities within a year of their discharge from the military can receive a tax credit of 40% of the first $24,000 in wages for a potential credit of $9,600.

• A similar credit is available for firms that hire a disabled veteran who has received unemployment compensation for longer than six months. The credit can be as high as $9,600 for for-profit employers and $6,240 for tax-exempts organizations.

There are also Special Employer Incentive (SEI) programs for training newly-hired veterans. Under them, firms can get partial reimbursement for salary and supplies.

There is no limit on how many eligible employees a firm can hire and receive credit. For instance, if you hire five veterans with service-related disabilities who’ve been unemployed at least six months, your tax credit ($9,600 x 5) would be $48,000.