A place to grow 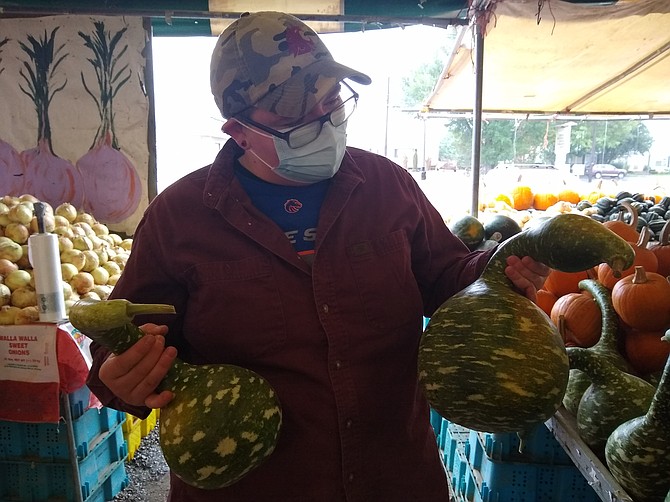 Liz Poteet shows off a pair of swan gourds, an heirloom gourd variety that many customers have never encountered before arriving at Poteet Produce.

Liz Poteet has spent a lifetime working at the family business — Poteet Produce, a fruit stand at 5959 N. Government Way in Coeur d’Alene. There aren’t many like it to be found these days.

The family has done business at that spot for almost two decades. Poteet's parents, George and Betty, were fruit-pickers from age 14. They worked in bean camps, grape vineyards and peach fields, traveling to Montana to pick cherries, following the fruit that was in season.

The fruit stand started in Sandpoint around the time Poteet, who is non-binary, was born.

“I have photos of me as a brand-new baby under the tarp tent,” said Poteet, now 33, with a laugh.

Poteet spent each summer working the fruit stand. When they were growing up, the family actually lived behind it.

The family managed to pull together enough scholarships and savings to send Poteet to Washington State University, where they initially planned to study music education. Then a sociology class changed the course of their life.

“I was able to view the world with a different set of terminology,” Poteet said. “Everything made more sense.”

After going to college, Poteet came to see their family’s way of life differently — so when it came time to choose between graduate school and returning to their roots, they chose the family fruit stand.

“I felt working long hard days would hurt my back less than sitting in a desk, being told what to do by a system,” Poteet said.

For Poteet, those long days begin with getting up early to take care of the garden, the chickens and the dogs. They pack a bag full of necessities, which includes a book. Though they used to work 12 hour days as a matter of course, Poteet has scaled back to 8 hours.

The fruit stand opens for business in April, when the smallest of the stone fruit, cherries, are available. Springtime is busy with the sale of flowers and trees, as well as bigger stone fruit — apricots, followed by peaches and nectarines.

“There’s a flow of when to plant and when to harvest and when things are at their peak of goodness,” Poteet said.

It’s a flow that many customers don’t fully understand, because different growing seasons and increased transport capabilities mean that fruits and vegetables are available year-round at supermarkets, even when they’re out of season.

“There’s a lot of misconceptions,” Poteet said. “I love poking holes in all those clouds.”

At the fruit stand, Poteet encourages customers to buy what’s in season. Their brother travels to Yakima weekly to buy produce directly from farmers the family has known for years.

Commercialization has given many people a skewed idea of how long produce is really good for, Poteet said, leading them to throw out fruits and vegetables that haven’t actually gone bad and return to the supermarket to buy more.

Poteet sells what many people might think of as imperfect produce — that is, “ugly” fruits or vegetables that may be a different shape, size or color than their grocery-store counterparts. Buying such produce has become something of a trend in recent years, which Poteet finds a little funny.

“In my brain, it’s all imperfect,” they said. “They’re all different. If you want a perfect apple, you can go to the store and pay three dollars a pound. Or you can come here and pay 17 cents a pound.”

Apples are in season, and Poteet has encouraged customers to buy a whole box — more than many people think they can eat before they go bad. Poteet has other ideas, however.

“It’s going to take five months for that box of apples to actually go bad,” they said.

In the meantime, those apples can become apple sauce, pies, cider and more.

“I like to encourage people to do something they’ve never tried before, to save time and effort in the future,” they said.

In the colder months, everything slows down. The fruit stand will close in the first week of November, then reopen for a month or so to sell Christmas trees, after which it will close again until April.

It’s a time for reflection and growth, when Poteet can focus on personal projects, including writing and creating art.

Poteet has been a certified master canner since they were in middle school, which means they’ve received in-depth training of up-to-date methods of food preservation.

“I know how to pickle, jam and can anything,” they said. “I know the safe processing for all the things that go into jars.”

Poteet competes at the North Idaho State Fair each year — except for this year, because the fair was canceled due to COVID-19.

The virus and related lockdown had a surprising impact on business, Poteet said.

The fruit stand didn’t open in April, like normal. Instead, the family held off until May, when they would have a better idea of what the season would look like.

When the business opened at last, many customers expressed an appreciation that they never had before.

“People were thankful we were here,” Poteet said. “They were afraid we wouldn’t be.”

Some even tipped, which Poteet said hasn’t happened before.

“I had so many customers tell me this was the first conversation they’d had with somebody,” they said. “They were coming out of quarantine fresh.”

All told, customers seemed more inclined to kindness this year, Poteet said. They noted how many Washington residents crossed the state line to buy produce, arriving in masks and gloves, treating Poteet and their family with respect.

For now, Poteet is looking to the future. Will there be a fair next year? What will the world look like in the coming months?

So much in life is uncertain, Poteet said — but the fruit stand will open again in April, no matter what. It’s an “archaic” way of life, but it’s theirs.

Until then, Poteet is focusing on the work — and on the season of rest that will follow.

“I’m looking forward to my off season, so I can work on embracing my own identity,” they said.

Swan gourds, which are shaped like the animal from which they get their name, are naturally ornamental.

Liz Poteet has spent a lifetime working at the family fruit stand.