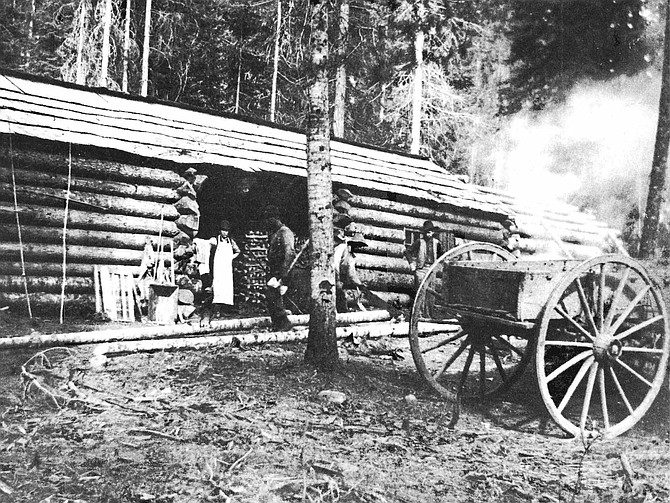 The Kroetch family has roots in the milling and timber industry dating back to the 1700s. Pictured is the Kroetch Bros camp in 1901.

But the Kroetch family has defied those odds by committing themselves to sustainable milling and timber practices.

For 100 years, the Kroetch Land and Timber Company have farmed North Idaho’s precious forest areas. Company President Brian Kroetch chalks up their success to the foresight of his great-grandfather and founder of the family’s first lumber mill, Joseph J. Kroetch.

Joseph J., known to his kin as J.J., was the husband of the late Helene Crane, a relative of Silas W. Crane who built the first house in Harrison during the late 1800s. His home still stands as the Crane House Museum.

After moving to the Harrison area at the turn of the 20th century, J.J. and the Connolly family began purchasing timberland throughout the Panhandle. At the time, Brian Kroetch said, the land could be purchased for a dollar an acre.

“Rather than buying wood to feed his mill in Harrison, he knew that owning land was the way to go,” Kroetch said. “He could supply the mill with wood and still own the land that will always grow more trees.”

Together, the two families established the Connolly & Kroetch Inc. mill in 1921. Little did they know their business would stand for another 100 years and employ four — soon to be five — generations of Kroetch relatives.

“J.J. Kroetch is something of a legend in our family,” Brian Kroetch said.

After J.J. died, the late Harry F. Magnuson became president of Kroetch Land & Timber Co. Magnuson was a prominent North Idaho figure, credited with protecting the history and development of his hometown, Wallace.

The Kroetch family’s legacy in milling began far before J.J., Brian said. Originally immigrants from Bavaria, their lineage includes both grain and lumber farmers. Around 1900 the family set up their first logging camp near St. Maries.

The Connolly and Kroetch, Inc. mill served several North Idaho businesses in its heyday, including the Bunker Hill Mine and Smelting Complex, Hecla Mining, and Day Mines, Inc.

Around 1980, the Connolly family was bought out and the Kroetch Land & Timber Company was born.

J.J.'s son and Brian’s father, Keith, continued his father’s legacy and passed down the same vigor to his children. Still, Brian Krotech said the family is “not all timber people.”

“It has been proven over the years that the business can provide benefits to the family indefinitely,” he said. “All it takes is careful management.”

“I’m not a very social person. But if you have to work with people, this industry is the best,” he said. “From the loggers to the mill foresters, these are very down-to-earth, honest people.

"As for the business itself, I love that it can be very hands-on, dirt-under-your-nails work, and yet require much thought, planning, and business sense."

Kroetch later attended the University of Idaho, graduating with bachelor's degrees in forestry production and engineering in 1996.

“It took six years, but I was able to add classes I knew would be helpful such as real estate, appraisal, and finance,” Kroetch said. “Going in as an older student, with experience already under my belt, helped me to pick courses that I knew would be useful. And they certainly were.”

“The fourth generation is managing the business now, and the fifth is up-and-coming,” Kroetch said.

The milling and timber industry has drastically changed since Kroetch entered the field in the 1980s, he said. Notably, Kroetch said mechanization and the use of equipment such as feller-bunchers and log processors “had not yet gained a foothold here in North Idaho.”

“It took some of the large, high-production contractors experimenting with the technology to get things started,” Kroetch said. “Heck, we didn’t even wear hearing protection, which I now know was a big mistake. As a result, there aren’t many individuals around anymore that can do everything — fell, buck, skid, load.”

Land prices have also greatly affected the business’ ability to grow, he said.

“There almost needs to be some speculative 'higher and better use' value (i.e., development) to make it work,” he said. “For a timber guy, that’s a bitter pill to swallow.”

With more neighboring property owners dividing up land, he said the issues of public and private access have become more strenuous. In exchange for state permitting and patrol services, Kroetch said the company partnered with Idaho Fish and Game to provide open access to land south of Coeur d'Alene.

A significant difference between past and present timber practices is how companies market their products, he said. To continue being competitive in current markets, Kroetch said companies need to be “very efficient or very specialized.”

“Sorting species and sizes for sale to different mills and trucking logs long distances can eat up a big portion of our profits,” Kroetch said. “We need to be very precise with our job cost estimates.”

Harvesting on Kroetch land is generally conducted by two main contractors — Mitch Donohoe Logging and Bob Cramer Logging. The company doesn't bid out logging jobs, Kroetch said, but rather “negotiates prices with good contractors and sticks with them.”

Having worked for contractors in the past, Kroetch said he's well aware of the “hard work and dedication of logging crews.”

“We are more of the mindset that if you pay someone fairly, they will give you more than a fair day’s work,” he said. “They will also take pride in their work and consider themselves part of a team. People like that don’t need to be told to do a good job — they really want to do a good job.”

Since 1996, nearly all timber sales have “selectively marked leave-trees,” Kroetch said. “Leave trees,” he explained, are the healthiest, most well-formed trees left by contractors after harvesting to promote natural regeneration.

That selection is part of the Kroetch Land & Timber Co.’s emphasis on silviculture — the growing and cultivation of trees and forests.

“A silvicultural system is a long-range harvest and management scheme designed to optimize the growth, regeneration, and administrative management of a particular forest type, usually with the goal of obtaining a perpetual and steady supply of timber,” Kroetch said.

Most of the company’s operations are performed by feller-bunchers and log processors, equipment designed to minimize residual damage and utilization suppressed and diseased vegetation. Kroetch Land & Timber Co. also conducts planting efforts, Kroetch said, but most of their property sees “abundant” natural regeneration and retention.

“Sustainability is our mantra,” he said. “Our average annual cut volume is approximately equal to our annual timber growth. In this way, we can continue cutting at our current pace indefinitely.”

Kroetch recognizes that it can be difficult for small companies to “forego a few dollars to do what is best for the land,” as those decisions “might be the difference between profit and loss.” But for large operations like Kroetch Land & Timber Co., he said it’s easier to pay a higher price to leave more trees in stream protection zones, improve road drainage and stabilize road fill.

In 2018, Kroetch was presented with the Idaho Tree Farmer of the Year award from the American Tree Farm System.

“As a member of the American Tree Farm System, we have committed to taking these types of steps to protect the environment,” Kroetch said. “Wood products from our timberland are considered ‘green certified.’ With these steps, we can look back with pride at our completed jobs.”

The Connolly & Kroetch Inc. mill, located in Harrison, was established in 1921. Pictured is the mill circa 1930.

The tug "Kootenai" was sold by Connolly & Kroetch Inc. in 1962 and moved to Sandpoint. This photo was taken on a beach on Lake Pend Oreille in 2017. 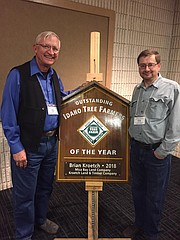 In 2018, Kroetch Lumber & Timber Co. President Brian Kroetch, right, was presented with the award for Idaho Tree Farmer of the Year. 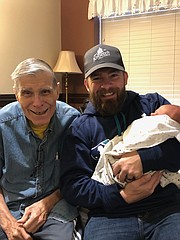 Fred, left, Joe, right, and Hudson Kroetch smile for the camera in 2018. The three men are descendants of Joseph J. Kroetch who established the family's milling company in 1921. 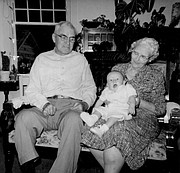 Since starting operations in 1921, the Kroetch Land & Timber Co. has grown to mill more than 22,000 acres across the Panhandle area. Here, a piece of company equipment gets to work near Mica Creek.

Kroetch Land & Timber Co. has built the business on a foundation of sustainability. Here, a company worker clears the path on Calusa Creek.

The Kroetch family immigrated from Bavaria in the 1800s. Pictured is the family's Bavarian homestead in 1880.