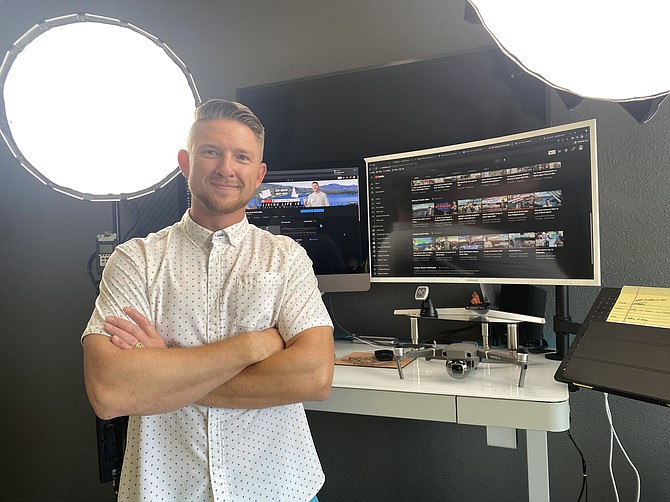 Trent Grandstaff, the face of the Living Life in North Idaho YouTube channel and founder of TG Squared Productions, stands in his downtown Coeur d'Alene studio.

As the face of the YouTube channel Living Life in North Idaho, Trent Grandstaff is keenly aware of the problems with rapid growth.

As a Realtor, the founder of TG Squared Productions hopes to add a bit to the rapid growth. But he's not your usual pitchman when it comes to presenting the North Idaho lifestyle.

Grandstaff’s “Avoid Moving to North Idaho” video reached almost 300,000 views in three months and his subscriber list is at 5,200 and growing.

The honesty, humor and education provided in his videos has made him something of a YouTube sensation. People interested in relocating here have contacted him from as far away as Brazil.

Using his expertise as a Realtor with eXp Real Estate, Grandstaff has assembled a carefully curated team of agents that he works with.

Keeping his focus on creating quality video content and then cultivating relationships with potential clients, Grandstaff then refers clientele to an agent when it's time to earnestly look for housing.

Currently on the hunt for more agents to handle these referrals, Grandstaff is meticulous about providing the best service possible.

“I have surveys that I use to make sure they’re doing a really great job. If they’re not — I let them go,” Grandstaff said.

When a home is sold, Grandstaff gets a cut of the commission. “I’ve referred out $42.7 million in real estate transactions this summer,” he said.

His team is in conversation with about 50 clients who are hoping to move here, he said.

But not everyone is happy about the publicity his videos create.

Grandstaff reads all of the comments posted on his channel and he isn’t surprised by occasional negative statements.

“There are locals who say that Idaho is full and that I’m ruining it,” he said.

As a 30-year resident, Grandstaff has first-hand experience.

“I like to retort by asking what would you like it to go back to - the poverty, racism and the really bad education?" he said. "Because that’s what we had and things are getting better now.”

Taking it as an opportunity for clear and direct conversation with critics and fans alike, Grandstaff says he’s “really surprised at how many people come back and say ‘I’m sorry, I didn’t mean to sound like a troll. I’m just really frustrated with traffic.'”

In his pursuit of creating great content, Grandstaff realized that he really likes “helping good people get moved here.” He believes he's in a unique position to “partially steer the rudder.”

“One group was like, 'We are incredibly liberal. We feel very strongly that Idaho needs to change,'” Grandstaff said.

They asked him how to get involved in politics once they got here.

“I told them - you don’t, and stopped talking to them.”

TG Squared was started four years ago as Grandstaff focused initially on providing video and photography services. At the Coeur d’Alene Resort, when you turn on the TV, the video that plays to highlight local hotspots was produced by Grandstaff.

He was trying to sell his marketing services to real estate agents after coming up with the referral idea in January. His business coach at the time, former Press chief photographer Jerome Pollos, thought he was definitely onto something. Grandstaff had the know-how to create good content but didn’t know how to get his work out there.

Grandstaff connected with Conor Hammons, who runs a YouTube channel with a focus similar to his. Hammons directed him to Jackson Wilkey, a local real estate broker at eXp. Wilkey responded by saying, “I’m not sharing this until you get licensed and join my brokerage.”

“I had a lot to learn after I completed the course, but I seem to have figured out how to make things go viral,” Grandstaff said.

“It’s one of the fastest growing ones and is actually world-wide and cloud based,” Grandstaff said. “The way it’s set up, even though the Realtors are competing, we’re still working together. It really creates a mentality of plenty versus scarcity."

Living Life in North Idaho is only 800 subscribers away from being the top real estate channel in North Idaho. In addition to creating more great content for the channel, Grandstaff is creating a channel for a mental health facility out of Vancouver, Wash.

Producers of an HGTV program out of New York recently approached him about doing a television series focusing on home renovation projects. Though he isn’t sure it's a good fit for his team, it is under consideration.

In the future, Grandstaff hopes to pursue making documentaries.

“That’s my dream job,” he said. “I’d like to do a documentary on how people are thinking right now. It’s so divided, some people are just really afraid.”

He views the growth and change as an opportunity for all residents.

“I help people understand that we can take a victim mentality, or we can take it as an opportunity,” he said. “I know a lot of construction companies would like more workers, electrical outfits, plumbing. Now as a tradesman, you can make a really decent living and that’s just going to continue.”

The future is bright for residents of the area, in Grandstaff’s view, and he's doing his part to keep it that way.

”Don’t try to preserve Idaho’s beauty by being ugly to people,” he said. “If the people are nasty, it’s not a beautiful place.”

A shot of Trent Grandstaff, from his YouTube channel Living Life in North Idaho.