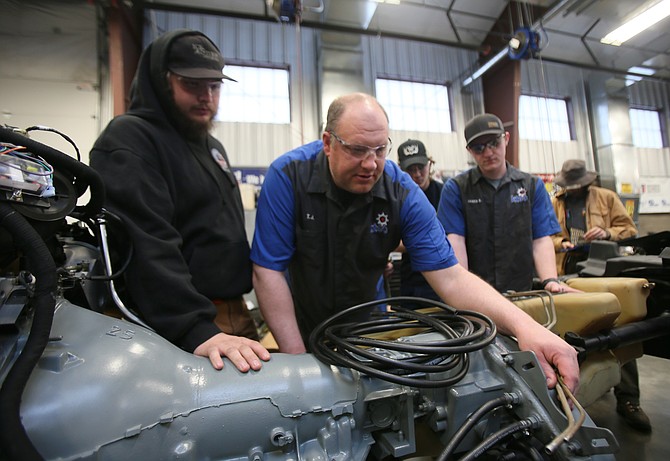 Entry-level automotive mechanics in the U.S. make an average of about $20 per hour.

According to Indeed.com, entry-level mechanics in Idaho will make an average annual base salary of $58,758, on par with the national average.

Kootenai Technical Education Campus — KTEC — has seen an increase in interest and enrollment in its automotive technology program. Director Colby Matilla reported that by spring break, 106 students had already signed up to start in the two-year program this fall.

"That’s way up from where we’ve been,” Matilla said.

In 2021, KTEC added a half-section of auto to expand the program.

“School-wide we’ve experienced huge interest and growth, especially auto," Matilla said. "Auto is one of our bigger ones."

But out in the community, what's KTEC hearing from employers?

“'We need employees,’ or 'There isn’t anybody — we need your students. How can we get your students?'" Matilla said.

Student interest for future jobs doesn't seem to be the main concern for industry insiders.

It's the present that's worrisome.

“There are not a lot of people applying,” said Alison McArthur, executive assistant at Knudtsen Chevrolet in Post Falls.

According to an April 10 Automotive News article, the industry will see a 4% decrease in the number of auto mechanics in the work pool through the end of the decade, while at the same time 100,000 jobs will open as Baby Boomers retire.

One Knudtsen Chevrolet employee who has been with the company nearly 40 years is retiring in July, McArthur said, with another one at just more than 30 years also on the road to retirement.

“We’re losing some really good institutional knowledge,” McArthur said. “How do you replace that?”

“They start out wanting this, and then there’s just so much,” Scheets said. “A good technician is an electrician, he’s a plumber, he knows hydraulics, mechanical, you got to be a mathematician. There’s a lot to it."

Knudtsen Chevrolet and other area dealerships work with KTEC to provide incentives and hands-on training for students seriously interested in auto mechanic careers.

Mike White Ford service director Ed Baker said while there "definitely is a shortage across the nation" for mechanics, his dealership focuses on "growing the up-and-coming" talent in North Idaho. Baker said he's hired about 10 people straight from KTEC.

“I’m out there at the school every couple months visiting with the students,” he said. "We have pretty significant Ford Motor Company presence at the school."

"After two years, that person will have 98% of Ford certifications. He just needs tenure at that point," Baker said. "Another three years and he’s basically qualified as a senior master technician."

Apprenticeship opportunities with dealerships give students a chance to work as lot attendants and advance to working alongside master-level mechanics. Tool bonuses are offered as budding professionals build up their experience.

KTEC begins discussions with potential students before they're even in high school.

"We have every middle school come out and tour that wants to come," Matilla said. "They get a sampling of all of our programs and they can self-identify which one seems interesting to them."

“We go out to the schools and we recruit during sophomore registration time just to keep them informed, keep KTEC on their mind and let them know it’s an option for them," Matilla said.

Cade Conboy, 20, of Athol, graduated from KTEC in 2019 and in 2021 completed the General Motors Automotive Service Educational Program at the College of Southern Idaho, where many new mechanics go to become GM certified.

“I’ve always liked fixing things,” Conboy said. “This industry has a huge shortage, so it was something I knew I’d always have job security in.”

"Every day I’m doing something new," he said. "It’s something you learn every day doing. It's something you can use your life outside of work. There’s always a need for it."

Kirk Scott of Hayden has been with Knudtsen Chevrolet more than 38 years. He attended North Idaho College for auto mechanic training and was 25 when he was hired at Knudtsen.

"I liked cars. I thought they were fun,” Scott said. "In all honesty, this is where I wanted to work. It just took me a while to get here."

Auto mechanics diagnose, troubleshoot and repair vehicles, sometimes specializing in different brands or parts. As the industry heads in a more electric direction, those interested in auto repair should be prepared to have a good understanding of computers and electrical systems.

However it evolves, Matilla said the auto industry isn't going away, in North Idaho or elsewhere.

Auto students work on a 1980s Humvee at KTEC.

Service technician Kirk Scott discusses working as a mechanic for Knudtsen Chevrolet for nearly 40 years. “I liked cars, I thought they were fun,” he said.