A career of connection 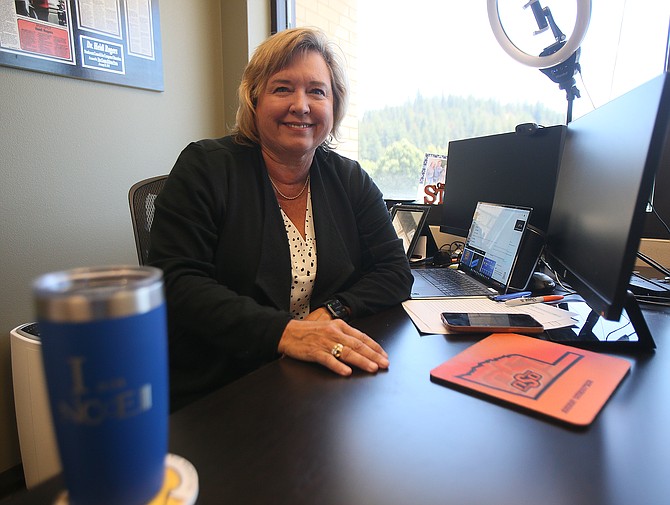 A proud Oklahoma State University graduate, Northwest Council for Computer Education CEO Heidi Rogers is celebrating 20 years with the organization. She is seen here at her desk in downtown Coeur d'Alene.

Geographically, the Northwest Council for Computer Education (NCCE) is helping to integrate technology and the internet in classrooms from North Idaho's Silver Valley to the U.S. Virgin Islands.

In the early days, NCCE members used Palm Pilots, the first widely used portable computing devices that became popular in the '90s, to conduct their work.

Today things are much different and CEO Dr. Heidi Rogers has been along for much of this journey.

“Look where we are now," Rogers said. "Cloud-based computing, Microsoft Teams, Google. All these focused apps that focus on specific learning tools."

Rogers, a proud Oklahoma State University graduate, is celebrating 20 years with the Northwest Council for Computer Education. Founded in 1971, NCCE is dedicated to supporting effective uses of technology in education.

"Our not-for-profit organization teaches K-12 educators and administrators how to use technology so students are engaged and learning,” Rogers said. "We also provide professional learning at the university level."

NCCE partners with the Idaho Association of School Administrators and the Idaho Education Technology Association. It recently partnered with the Idaho STEM Action Center 2022 Summer Institute to provide a keynote speaker for every location across the state and to provide instructional speaking sessions in Idaho Falls and Pocatello.

NCCE also partners with organizations across the country, including the Coalition of Oregon School Administrators, School Administrators of Montana, the International Society of Technology in Education, Girls Who Code, Common Sense Media and Staples. It is the largest global training partner for Microsoft and a partner in education for Google.

When Rogers began with NCCE, she was in a volunteer role. She simultaneously worked for the University of Idaho Coeur d'Alene for 25 years. Early with the U of I, she helped launch a model technology program, Classroom 2000.

"Coeur d'Alene School District students used the University of Idaho Classroom 2000 during the day; teachers were trained in the evenings and on the weekends," Rogers said.

"I remember plugging in the internet," Rogers said with a laugh.

Then she was hired by NCCE to lead the member organization and host ed tech conferences in Spokane, Portland and Seattle.

“I was the first full-time employee,” she said.

Today, NCCE has more than 100 people on its team, including professional learning specialists and full-time employees in more than 24 states. Its volunteer board consists of educational representatives from Idaho, Montana, Oregon and Washington.

“I have the best team and board in the world, and they work across four time zones," Rogers said. "We worked remotely before remote was mainstream."

Even though the organization's mission began in the Northwest, its impacts are far-reaching.

"I’ve always said 'Northwest' just depends on where you’re standing,” Rogers said with a smile. “We’ve gone from New York City to Gallup, N.M. The work became so broad across the country. There are times we could be in 40 states in one year."

NCCE, headquartered in downtown Coeur d'Alene, hosts a large annual conference that connects educators and presenters from around the country. Hundreds of sessions help attendees enhance their knowledge about how different technology and programming can transform learning experiences in the classroom.

Rogers said NCCE was the last to hold a conference in the Seattle Convention Center before COVID-19 shut down everything in 2020.

“I can solve any problem, I’ve always said," Rogers said. "If we don’t have enough bandwidth at a conference, then we can buy more bandwidth. I can buy more pizza or more coffee. I can be a cheerleader. But that was a health risk. It was extremely hard.”

As an organization that helps people understand how to technology, the abrupt requirement for remote learning made workloads explode during the COVID years. Rogers said when Kansas sent its teachers home, the staff had plenty of work to do.

"What happened was our team shifted to professional learning by remote. It was fascinating," she said. “I hope society realized that teaching isn’t easy. Our kids spend a lot of time at school. For teachers to pivot to remote learning in 2020, now that was uncharted territory across the nation. They're worried about their own family and kids. It just changed the whole learning environment."

Prior to the pandemic, the Northwest Council for Computer Education began offering a full-service E-rate program to schools and libraries in Alaska, Hawaii, Idaho, Oregon, Montana and Washington in 2016. It served both the largest district in Alaska and the smallest district in Montana — and everything in between. E-rate programs help schools and libraries access affordable telecommunication and internet services.

Rogers said she recalls helping a rural school in Montana link to the internet.

"If you think about that wheel that goes and goes and goes, their lessons and the videos came so fast," she said. "They were in awe."

The Avery School District E-Rate project in 2019 brought fiber connectivity to that rural district for just less than $2.8 million. NCCE worked with the district for more than three years to get fiber from Plummer to Calder.

Rogers said it was a game-changer for Avery School District and the 9,000 people living along the 35-mile connectivity route.

"We were happy to partner with the Avery School District, State Department of Education and E-Rate resources to make this happen," she said. "Not only will Avery students have access to the same quality of education as other students in the state, this may also allow the school district to grow and prosper."

In 2021, NCCE expanded its program to include support for districts applying for Emergency Connectivity Fund support.

As of 2022, the Northwest Council for Computer Education E-Rate program has impacted more than 100,000 students, served 45 clients in six states and returned $7.8 million to school districts.

While orchestrating professional learning is at the core of the Northwest Council for Computer Education, people are at its heart. It's not just about connectivity — it's about human connection.

“What I have enjoyed most is the people,” Rogers said. "There’ve been times where you just see teachers light up about a product or a tool or success. It’s the ‘Aha!’ moments for teachers and students of the power of technology and how it can help them learn math, science, history, anything. It’s just not computers. It’s just a tool.”

Rogers said she feels blessed to have fallen into this ever-changing career and to be able to raise her son, Weston, in North Idaho.

"I love Coeur d'Alene and this community," she said. "It was through great mentors that I fell into what I did. In all the technology of the world, it’s the human side that drives me."

The Northwest Council for Computer Education Professional Learning Team is seen at an August 2022 meeting in Tampa. From left: Maria Turner of Florida, Noreen Dooley of Texas, Heidi Rogers of Coeur d'Alene, Shannon Davenport of Tennessee and Michael Higley of Florida.

Heidi Rogers is seen here with her son Weston Rogers in the University of Idaho’s Classroom 2000 in 1996.