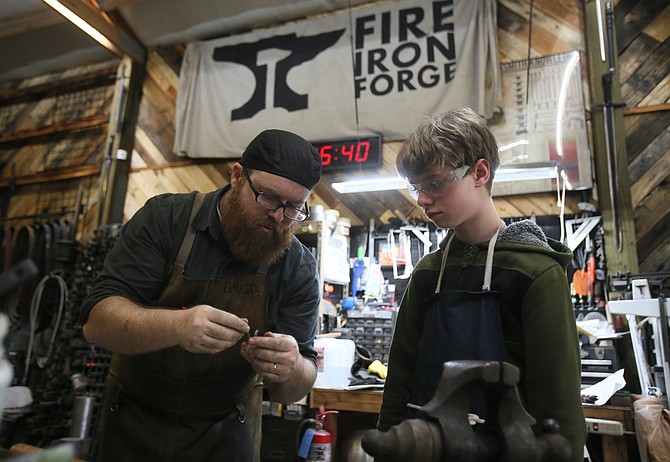 Fire Iron Forge owner and blacksmith David Walker inspects a hook his student Leo Adira, 12, is working on during a session at the forge.

On any given day, David Walker, in his long blacksmith’s apron, glides from station to station in Fire Iron Forge at 7270 Crenshaw St. in Rathdrum, the business he built from passion and perseverance in the large shop behind his home.

Vices, hammers and other tools hang from pegs and pallet wood that cover just about every inch of the walls. Buckets of water, fans, anvils, grinders and measuring equipment are scattered throughout the shop, which extends beneath a cloth-covered carport out into the driveway.

Walker, 39, has been interested in the craft of blacksmithing since he was a boy. As a youth, he experimented by heating metal in campfires and smashing it when it began to glow. He was inspired to learn how to make tools and weapons by 1980s films such as "Conan the Barbarian" and "Highlander." His personal weapon collection featured authentic throwing stars, a katana and a World War II bayonet.

As an adult, Walker returned to this love of forging one's own steel by self-teaching using a homemade forge he created out of bricks on his garage floor, using propane, a weed burner and a chunk of railroad track.

“I loved that," he said with a smile. "That was the coolest thing in the world to me."

A church friend who is a farrier — a craftsman who specializes in horseshoes — let Walker borrow his coal forge and showed him how to use it.

And a modern-day blacksmith was born.

"I wasn’t planning on being a full-time blacksmith," Walker said. "It was just something I did as a hobby."

It was in 2015 Walker taught his first students, a casual group of his kids and their friends, neighbors and friends from church.

A former truck driver and helicopter instructor, Walker was drawn to blacksmithing like a moth to a flame. He taught classes on weekends and welcomed anyone who was willing to learn.

Fire Iron Forge opened in January 2019. Walker and his apprentices have the ability to create custom ironworks and locally made unique blacksmithing items, but at the heart of this modern step back in time is education.

Through blacksmithing, Walker connects his students to safety and responsibility, science, art, geography, physics, mathematics, and, of course, history.

“With blacksmithing, we connect a ton,” he said. "Blacksmithing has been around so long, the history of it is about as rich as anything gets.”

Many of his students are homeschoolers whose families appreciate hands-on, tactile learning opportunities for their kids. Field trips are also welcome.

Leo Adira, 12, of Post Falls, has been curious about blacksmithing since he was 7.

“I like hitting things with hammers,” he said, grinning. "It’s very cool that you can still do this and it’s not just machines."

His mom, Amylouise Smith, said she was thrilled to learn about Fire Iron Forge through a social evening for homeschooling moms.

"It’s amazing, and it’s really nice he has the heart of a teacher and works with kids,” Smith said. “Leo is 12 and has wanted to do this since he was 7. I was prowling the area to find somebody to do it and they wouldn’t talk to anyone under 14. It was just a no go.

"It used to be schools had shops,” she continued. "How are they supposed to figure out what they want to do in their life if they can’t ever try anything?”

"When you make something out of metal, it’s going to have a purpose," Walker said. "Because you're forging it all by hand and you’re designing it, how do you make it look beautiful and function better though your design?"

Walker said he loves when students struggle through projects to have that "Aha!" moment as they learn the craft.

"As a teacher, I know where they’re at, mentally emotionally and physically. There’s a moment where it clicks and they get it," he said. "After that comes this confidence that is amazing, and it’s fantastic."

Along with the end products, the social connections and memories forged at the forge are as precious as the keepsakes students create.

“The thing they made will last forever, it’s going to outlast their great-grandkids,” Walker said. "The memory of the time they went to a real blacksmith shop with Mom or Dad or brother, or even if they come by themselves, they'll remember that forever. It's really a blessing to be a part of that."

Blacksmith David Walker waits to pull a piece of hot metal from the forge. At Fire Iron Forge in Rathdrum, students learn all about the old-school craft of blacksmithing.

Fire Iron Forge owner and blacksmith David Walker showcases a machete made from a lawnmower blade.

The possibilities are endless at Fire Iron Forge, where students can learn to make knives out of railroad spikes.