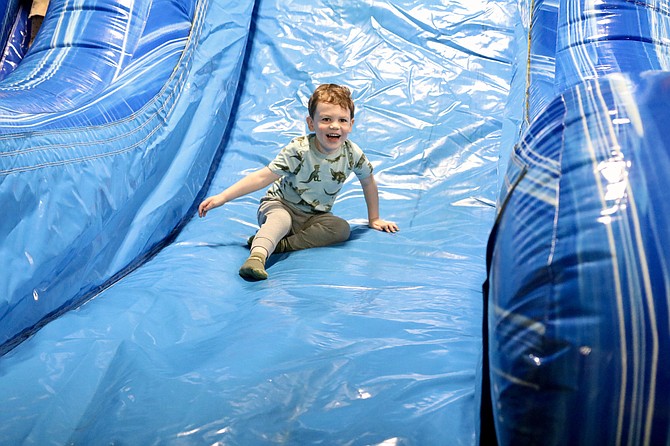 Kolby Porria, 3, visits his favorite bounce house at Jump for Joy with his grandparents.

Ben Woitas said that when he started his business 10 years ago, his friends thought he was taking a big risk.

“They didn’t tell me till years later, ‘We thought you were crazy doing that stupid idea,'" Woitas said, laughing. "Now they’re all like, ‘It was a pretty good idea.’”

The idea for Jump for Joy popped into Woitas' head one day when he took his granddaughter to a bounce house, and he decided Coeur d’Alene could benefit from a similar business. He took a leap of faith, not having experience in that field before, and started researching and crunching numbers for the new business.

Woitas said he called a lot of jump house businesses across the country and tried to put together a plan of what worked and what didn’t. He also got a coach from the North Idaho Small Business Development Center to help him get the business started.

“I didn’t know what I was doing,” Woitas said. “I had no idea how to run a business, just kind of figured it out.”

Woitas told the coach that if he made just 50% of what the other businesses were making he would be doing fine. His coach told him to lower his expectations and cut the number to 5%.

That advice probably saved Jump for Joy from failing early on, Woitas said.

Once they were approved for a business loan, Woitas and his wife found a location for the business and set to work cleaning it up.

“It was a mess,” Ben Woitas said. “We pretty much did the work ourselves.”

May 16, 2012 they opened their doors. Ben was the only employee for the first nine months.

“Didn’t hardly make any money,” he said. “Whatever little money was coming in just paid the bills.”

Finally at the end of the year, Woitas said he started making enough to pay himself and got his first employee. He said he received a lot of help from his business coach and the internet.

Over the last 10 years, business has slowly improved each year, Woitas said, with the exception of 2020 with the COVID-19 pandemic. In 2015 they added the bounce house rentals, and in 2019 they opened a second location in Spokane Valley. Today the Coeur d’Alene location has eight employees.

It was a lot of hard work early on, but now it's paying off, Woitas said.

“It’s nice that it’s a family run business because there are not very many of them around anymore,” Maureen Woitas said.

Woitas said Maureen came up with the business name, and when he heard it he knew it was perfect.

“We thought we were being unique,” he laughed.

They found there were five other businesses in Washington with the same name. Luckily, none of those were bounce house businesses.

Woitas said one thing he learned after starting the business is that he really likes kids.

“I get such a kick out of them,” he said. “Their excitement that they have, the joy. They’re just so fun. It’s so cute … that's been like a bonus for me."

He said it’s fun to have kids recognize him as the bounce house owner when he goes around town in his brightly colored business car.

“Kids are waving at me all the time,” Woitas said. “We’ve been here 10 years now so most kids recognize us.”

Woitas said they’ve had kids who used to come in to jump now working for them, or bringing in other kids they’re now babysitting. He said he’s expecting down the road they’ll start seeing moms come in who used to come as kids.

John Porria of Rathdrum said his 3-year-old grandson Kolby has been coming to jump for about 18 months. Porria said they’ll bring him about once or twice a week during the winter when it’s too cold to play outside. He said they’ve also gone to other local bounce house places.

“But Jump for Joy is his choice,” Porria said. “He loves it.”

Ben and Maureen Woitas own Jump for Joy, a bounce house business in Coeur d'Alene.