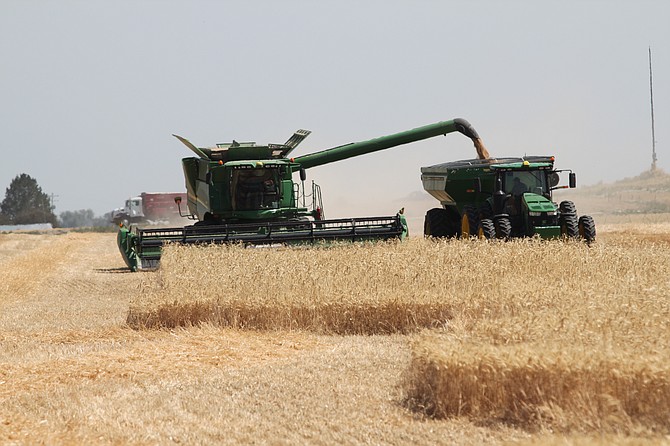 The total value of agricultural production in Idaho dipped by 1 percent in 2021 compared with 2020, a result of last year’s severe drought conditions, which decreased yields and total production for most of the state’s major crops. Despite that production decline, Idaho ranked in the top 8 nationally in 22 different ag commodity categories last year.

The state also ranked No. 2 in the United States in 2021 in sugar beets and hops, No. 3 in milk and cheese production and total milk cows, No. 4 in dry onions, spring wheat and lentils, and No. 5 in dry edible beans, corn silage and dry edible peas.

Idaho ranked in the top 8 nationally in 22 different ag commodity categories last year despite the fact that the total value of agricultural production in Idaho dipped by 1 percent in 2021 compared with 2020.

That decrease on total ag production value was likely a result of last year’s severe drought conditions, which decreased yields and total production for most of the state’s major crops.

Before last year, the total value of Idaho ag production had increased for four straight years.

Idaho’s total agricultural production value in 2021 was $8.32 billion, down 1 percent from the 2020 value of $8.41 billion, according to USDA’s National Agricultural Statistics Service.

The total value of all crop production in Idaho last year was $3.3 billion, down 8 percent compared with 2020.

However, the total value of livestock production in Idaho last year was up 5 percent, to $5 billion.

Milk remained the state’s top ag commodity last year in value of production, at $3.1 billion, which was up 3 percent from 2020 and the second highest value of production on record for Idaho milk, behind the 2014 total of $3.2 billion.

That’s why wheat ranks ahead of hay in the Idaho farm cash receipts rankings.

Those top 5 commodities — milk, cattle and calves, potatoes, hay and wheat — had a combined value of $7.1 billion, which accounted for 85 percent of the state’s 2021 production value for all ag commodities.

Those same five commodities accounted for 79 percent of the total value of Idaho agricultural production in 2020.

The total value of Idaho hop production topped $100 million for the first time last year and that Idaho ag commodity has increased in total value for nine straight years.

Idaho took over the No. 1 spot in the U.S. in 2020 for alfalfa hay production, which is probably no big surprise given the state’s sizable milk and cattle industries. Idaho ranked No. 3 in that category in 2019, behind Montana and California.

Idaho ranks No. 3 nationally in total number of milk cows and No. 11 in cattle and calves.

“We have a lot of animals to feed in Idaho,” he said.

“That’s where you get your quality from, the higher altitude,” he said. Between the cooler nights and higher altitude, “that brings the relative feed value of your hay up.”

“It has a lot to do with the weather,” said Twin Falls County farmer Rick Pearson. “It’s because of our climate — warm days and cool nights.”

Pinto beans are harvested in a field near Wilder in October. Idaho ranks No. 1 in five different agricultural commodities.