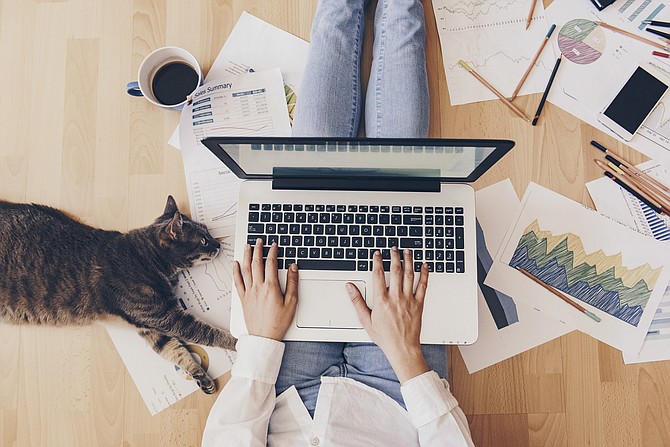 A study from resume.io that analyzed Twitter posts found 41.8% of Idahoans' tweets about working from home to be positive. It helps to have feline office assistants, of course.

Idahoans are so happy working from home, they're tweeting the world about it.

Resume.io, a resume-building website, analyzed more than 600,000 geotagged Twitter posts to see where workers are most supportive and critical of remote work.

The findings revealed 41.8% of Gem State tweets about working from home were positive.

"The most recent data estimates that 13.6% of workers in Kootenai County worked from home in 2021," said Sam Wolkenhauer, labor economist with the Idaho Department of Labor. "That’s a big increase from pre-pandemic. In 2019, the corresponding figure was only 6.3%, so clearly there has been a significant turn toward remote work. It is a little lower than the national rates though — 17.9% of workers worked from home in 2021 nationally."

Considerable negative sentiment against remote work was revealed in Baltimore, where 26% of tweets were critical of it.

Wolkenhauer said a significant portion of the economy cannot work remotely — production industries such as mining, construction and manufacturing, health care, personal services and others.

"So most of this is going to be administrative or 'knowledge work,'" he said.

He said he thinks the cost-benefit analysis of working from home is still being parsed out.

"Obvious benefits include avoiding commuting time and simplification, but communication and collaboration is also more difficult," Wolkenhauer said. "It’s also not yet clear how remote work impacts productivity. It probably varies by person. Some workers have reported working longer hours when they work from home — the work-life barriers are lower — but there’s also the potential for some workers to be distracted at home."

He said ultimately, the move toward large-scale remote work is fairly new and analysts are still getting a handle on how it is changing the nature of work.