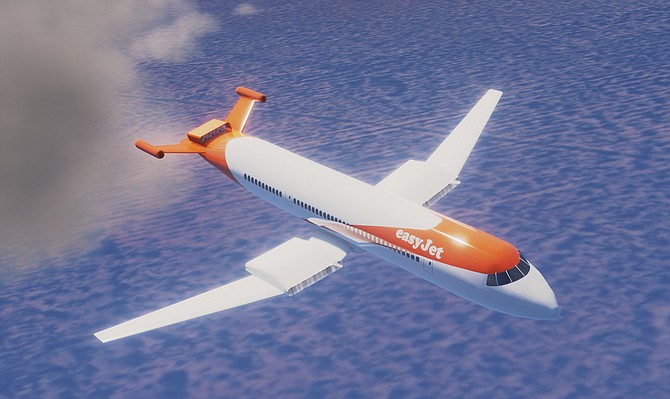 Wright Electric anticipates the Wright 1 electric jet will be ready for passengers by 2030. The airplane, flown by European airliner easyJet, paves the way for emission-free air travel. JENNIFER PASSARO/BJNI

Darold Cummings is perhaps one of the last aeronautical engineers to pencil his airplane designs on sketch paper.

With a 2H pencil and keen attention to detail, Cummings created 37 U.S. patents, many of them airplane blueprints. For almost two decades Cummings has worked in his small office beneath a framed lithograph by Salvador Dali titled “Lincoln in Dalivision.” Behind the desk, a picture window holds the blue wash of Lake Coeur d’Alene. Perhaps something about that view gives Cummings the desire to design flight.

Last summer, Cummings added another patent to his portfolio: The outline for a 186-passenger electric airplane. Wright Electric purchased the patent and propelled the design forward.

On Jan. 30, Wright Electric announced the actual configuration of the airplane in New York City. The company asked Cummings to join the announcement celebration, but even at 75, Cummings was too busy working on his next project, a classified task, of course.

Wright Electric anticipates the Wright 1 electric jet will be ready for passengers by 2030. To achieve commercial flight capability, the electrical systems have to be engineered at the megawatt scale by building a 1.5 MW electric motor and inverter at 3 kilovolts, Cummings said. These components will form the power plant of the revolutionary electric aircraft and pave the way for a future of zero emissions on flights worldwide.

“It’s really difficult to make an airplane this large that’s just powered by batteries,” Cummings said. “You’d really have to have an extension cord. So what we have are these turbo generators that run at a constant speed; a very, very efficient speed.”

Powered by jet fuel or newer biofuel, the turbo generators create electricity to run 14 fans that propel the airplane through the air.

The turbo generators use less fuel than a motor engine and they use it more efficiently.

“It’s what I call an organic solution,” Cummings said. “You have each part as efficient as it can be. In other words the turbo generators, since they run at one speed, you can optimize the pressure or temperature they run at. You can even treat the forward part for sound because you know the frequency it is running at.”

The fans, dispersed in three nacelles on the wings and rear of the plane, can operate on a broader rpm spectrum more efficiently than a gas motor, he said. A nacelle, from the French, is anything that contains the motors of an engine.

The rectangular shape of the Wright 1’s nacelles are somewhat unusual and usually found in a cylindrical form on the jet wing.

A nacelle is not the only aeronautical term borrowed from French.

Many aeronautical terms originated from the French, according to Cummings. Fuselage, the body of an aircraft, comes from the French "fusele" meaning "spindle-shaped." Empennage, an arrangement of stabilizing surfaces at the tail of an aircraft, derived from the French “empenner” which means "to feather an arrow.” Aileron, a hinged surface in the trailing edge of an airplane wing, used to control lateral balance. Aileron means "little wing" in French.

Once the Wright 1 takes flight it could impact the way human beings travel the globe.

“The airplane is laid out to be extremely safe, extremely redundant, extremely quiet,” Cummings said.

In January, Wright Electric also announced that it’s working with BAE Systems, a British multinational defense, security, and aerospace company headquartered in London, to help accelerate the new technology for the design.

Wright Electric’s partner, European airliner easyJet, welcomed the electric design announcement as an important milestone on the path to electric commercial aircraft. Since 2000, easyJet has reduced the carbon emissions for each kilometer flown by a passenger by 33.67% and has a target to reach a 38% reduction by 2022.

Wright intends to conduct ground tests of its motor in 2021 and flight tests in 2023.

Numerous government agencies in the U.S. are funding research into electric aviation, including NASA and Air Force Research Laboratory.

A regular airliner has to have two massive engines, so if one fails the second one has enough thrust to keep the airplane in the air. The Wright 1 has 10 fan engines on the wings and four on the tail, so if one fails it does not impact the plane’s ability to fly.

Cummings’ design also uses boundary layer ingestion, reducing drag in the back of the electric plane and increasing its fuel efficiency.

Cummings gets goose bumps just thinking about his ability to do this work, to participate in advanced global aeronautical design from his home, here in North Idaho.

Aside from Dali, the walls of Cummings’ office hold a collection of vintage ray guns, an aviation library, and a handful of his 40 Bonneville racing records. Cummings’ father was a WWII B-17 bomber pilot. His WWII medals adorn the wall. Cummings pauses as he traces his father’s wings. In a room teeming with model airplanes, these wings give Cummings the most pride.

Everything Cummings designs from his office is 10 to 20 years away from flying. He is a man who lives very much in the future.

“The community of people that do what I do is maybe 50 people,” Cummings said.

“They told me they’d like me to come back until I’m dead,” Cummings said with a chuckle.

Stellar students from all over the world come to study at the academy. Cummings teaches them how the human brain operates on four different frequencies and how the theta wave, where the brain operates between sleep and wakefulness, holds the most creative power. His lessons encourage cadets to be spontaneous in a creative way not normally endorsed by their rigorous course loads.

Cummings sees it as a way to help the students bond, so that someday, when they’re running the air force programs in their home countries, they can call one another and have open, problem-solving dialogue.

Cummings has designed innovative aircraft for the U.S. military. But he teaches a different kind of innovation, one that focuses on peace and conversation.

“Not only are you enforcing the future of the United States Air Force, but the air forces of the free world,” he said. “That’s why I go back.”

Darold Cummings, president of ForzAero, holds the U.S. patent for his design of an electric jet engine in his living room in Coeur d’Alene.